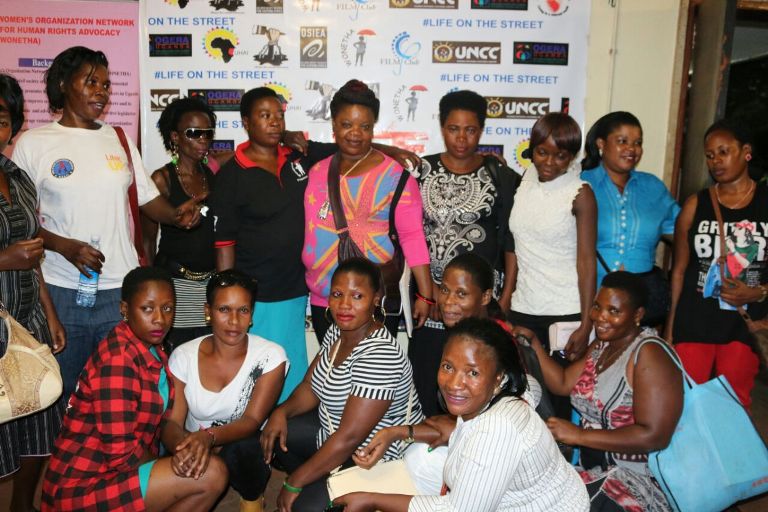 On 7/6/2016, East Africa Visual Artists, an organization that uses pictorial illustrations to advocate for the rights of minorities launched a movie titled “Life son the Streets” at the National Theater in Kampala. With support from Open Society Initiative for Eastern Africa (OSIEA) and UHAI-EAHSRI, EAVA launched the movie that advocates for the rights of female sex workers. They also collaborated with Women’s Organization Network For Human Rights Advocacy (WONETHA), Lady Mermaid’s Bureau, Organization  for Gender  Empowerment  and Rights Advocacy (OGERA) to bring to life this great initiative that highlighted  the day to day challenges of female sex workers in different parts of the country.

The 1hr and 13 minutes long movie stars both sex workers, sex work advocates and others from the grassroots levels. The filming crew sampled  spots in Kampala and the surrounding districts that have high concentration of sex workers and mostly  centered on slums and Kampala streets as well as few landing sites and islands on Lake Victoria.

In Uganda and some other parts of the African continent, sex work is considered a taboo and is punishable by law; therefore this grants some law enforcement agencies especially the police the mandate to arrest anyone caught practicing sex work. More so, most religious factions in the country still consider sex work ungodly and call for all those involved to turn to God for redemption.

Through this movie, one gets to know what life means to live as a sex worker in a country like Uganda and the dangers associated with this risky venture. Many of the sex workers interviewed confess to have been arrested from various night spots, detained and tortured by the police and others share their experiences being tortured by their clients and or even raped. One of the characters narrated how a client once forced her to breast feed his tortoises or else gets killed; a scene hat leftthe audience in total dismay.

The short film further features the exodus of sex workers to some areas such as landing sites and islands perceived to be lucrative in relation to their business. According to some recent surveys, it has been discovered that the HIV/AIDS prevalence rate around fishing villages in the country is high compared to other areas. This puts the health of women doing sex workin such areas at risk of acquiring the virus and other STDs.

To fight the spread of HIV/AIDS and other STDs, the sex work movement through collaboration with other health facilities that provide free and friendly health services to the marginalized communities trained peer educators to help bridge this gap. Together they have sensitized their fellow sex workers on how to protect themselves from acquiring the virus and those infected to adhere to their medication.

One of these peer educators in the movie notes that however much they try to serve their community, they face many inadequacies in this voluntary work such as long distances between them and their clients.

Activists and leaders from the Ugandan sex work movement who featured in this documentary pointed out some of the achievements they have registered; most notable being able to bring on board various partners from both the government and the civil society. Through their intensive advocacy, sex work activists have been able to engage different partners from the ministry of health, the Uganda Police, mainstream human rights organisations, religious and cultural leaders and many more. As a result they say there is now a widened referral base for sex workers in Uganda because many healthy workers have been trained and sensitized about the urgent health needs of sex workers.

However, they further the challenges they have experience doing both sex work while also advocating for the rights of sex workers.

Most of the current laws enacted by the Uganda parliament such as the anti-pornography law, HIV/AIDS Act, Public Management Order Act make it hard for sex workers to operate since most of these render most aspects of their work illegal.

Vincent Kyabayinze, the Director for East African Visual Artists thanked OSIEA and UHAI-EASHRI for providing the grants that made this project a success. He also thanked the sex work organisations that partnered with EAVA to put this movie together.  Over 360 people turned up for this movie premier and the event ended with a Q&A engagement segment between the audience and the panel which included representatives from the sex work movement, Uganda Police and Marpi Mulago.