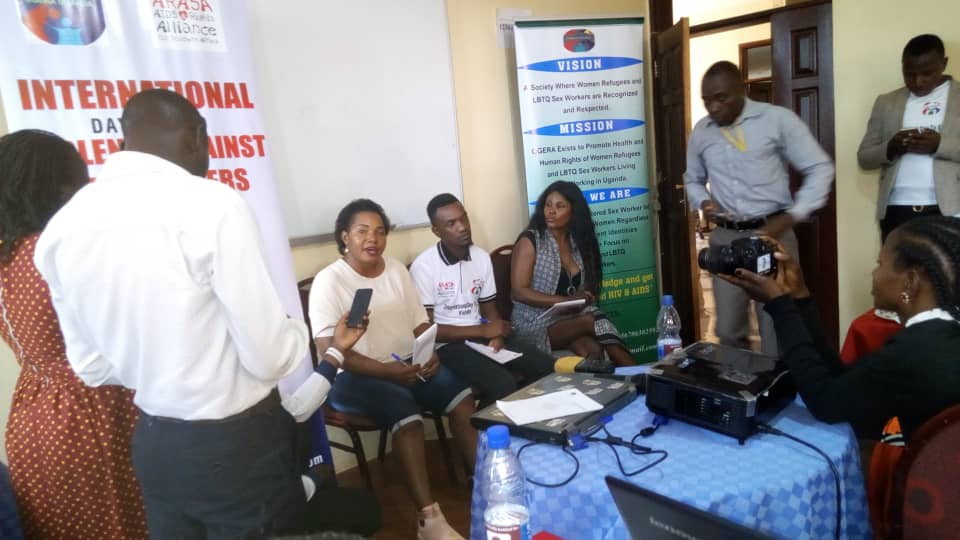 Organization for Gender Empowerment and Rights Advocacy (OGERA) Uganda, an organization led by LBTQ and Refugee female sex workers held a press conference to commemorate International Day to End Violence Against Sex Workers on 17th December 2018 in Kampala. The event focussed on drawing attention to the preposterous acts of violence against sex workers across the world. It was supported by AIDS & Rights Alliance for Southern Africa (ARASA). Several partners, allies, members of the sex workers' movement and media took part in the event.

Based on a report by Human Rights Awareness and Promotion Forum (2017), 153 out of 186 cases of violence against sex workers in Uganda were perpetrated by the police. In her opening remarks, Sanyu Hajara noted that transgender female sex workers have been prone to most violence this year. "You have seen them over the news and social media platforms. They have been arrested, paraded, undressed and publicly

shamed. Many police officers use narcotics, drugs and excessive alcohol that influence them to force sex workers into unprotected sex. Such risks escalate the prevalence of HIV within our sex work community."

Hajara advised that the police should be sensitized on the impacts of these violations. She demanded that it is their obligation as law enforcers to protect the rights of sex workers as they are part of Uganda's citizens. The police should also apprehend those who inflict these injustices to enforce justice for the victims.

After applauding reporters on their affirmative response to cover the press conference, Luswata Brant discouraged the media from sharing baseless, negative and biased stories about the sex work movement. He explained that sex workers are respectable people in our society and this is how they take care of their responsibilities. Such news distorts their image due to social stigma and discrimination attached to sex work, triggering an increase in violence against them.

Brant further raised a concern that the unwarranted arrests and torture of sex workers without knowledge of their HIV status is detrimental because some are living with HIV. The absurd detentions affect their adherence to ART treatment. "If sex workers are arrested, police must inquire about their HIV status. Those who are HIV+ should be allowed to access their medication. The police can take advantage of community peer educators to ensure that adherence is key for our patients."

Juliet Katongole, who is also the Chairperson of the board for Uganda Network of Sex Work Organizations (UNESO) explained the relevance of UNESO in the advancement of sex workers' rights in Uganda. UNESO is a non-discriminatory umbrella that embraces all diversities and affiliations of sex workers in different regions of the country. The network has amplified the voices of all sex work organizations in rural and urban areas. It has also fostered their visibility which has allowed them to speak out and address their challenges at all levels in society.

According to Batte Shamilah (the ED of OGERA Uganda), the sex work community is continuously confronted by numerous threats and prejudices. Apart from police brutality, there are cultural beliefs and existence of unfair legislation like the Anti-Pornography Act and the HIV Prevention and Control Act that criminalize sex work. These punitive norms and laws weaken the community approaches put in place to combat the HIV scourge within the sex work community. Despite collaborations with several health facilities, condom and lube distribution, these strategies are aimless without government support.

Working late hours of the night prompts cases of rape, kidnap and murder of sex workers. Batte said that, "Most killings of women in Uganda from last year into early this year were female sex workers who were used for ritual sacrifices. Often, these acts of violence are unaddressed and unpunished." She suggested that government should get involved in addressing challenges faced by sex workers and not shun them. The punitive laws should also be decriminalized to eliminate such violence.

OGERA Uganda also showed its documentary "Enough Is Enough" which tells life experiences of sex workers in Uganda. In closing, the press statement was read by Batte Shamilah and a moment of silence was spared in remembrance of sex workers who lost their lives to hate crimes, violence and the HIV epidemic.