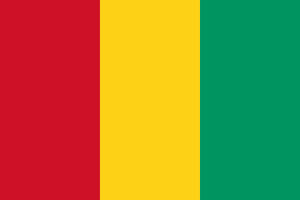 Guinea, officially the Republic of Guinea, is a country in West Africa. Formerly known as French Guinea, it is today sometimes called Guinea-Conakry to distinguish it from its neighbour Guinea-Bissau and the Republic of Equatorial Guinea.

Any indecent act or act against nature committed with an individual of the same sex will be punished by imprisonment of six months to three years and a fine of 100,000 to 1,000,000 Guinean francs. If the act was committed with a minor under 21 years of age, the maximum sentence must be pronounced. If the act was consummated or attempted with violence or attempted violence, the guilty person will be condemned to five to ten years of imprisonment.

A public indecency is defined as any intentional act committed publicly and likely to offend the decency and the moral sentiments of those who are its inadvertent witnesses.

Any person that has committed a public indecency will be punished by three months to two years of imprisonment and a fine of 50,000 to 450,000 Guinean francs or simply by one of these two punishments.

When an indecent act is committed by a group of individuals, the penalties described in the first paragraph of the current article will be doubled.