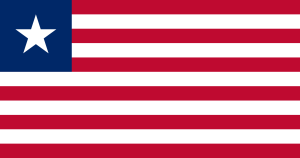 Liberia, officially the Republic of Liberia, is a country in West Africa bordered by Sierra Leone to its west, Guinea to its north and Ivory Coast to its east. It covers an area of 111,369 square kilometres and is home to about 4 million people.

Subchapter D (relating to sexual offences) of Chapter 14 of the Penal Law of Liberia criminalizes voluntary sodomy, as follows:

Section 14.79. Definitions relating to sections on sexual crimes against the person. In this subchapter:

(a) “sexual intercourse” occurs upon penetration, however slight; ejaculation is not required;

(c) “sexual contact” means any touching of the sexual or other intimate parts of a person for the purpose of arousing or gratifying sexual desire.

Chapter 50 of the Penal Code of Liberia specifies the penalties for violating the preceding laws:

(a) For a misdemeanor of the first degree, to a definite term of imprisonment to be fixed by the court at no more than one year….

Section 50.9. Authorized fines; restitution. 1. As to individuals. Except as otherwise expressly provided, and subject to the limitation contained in paragraph 3, an individual who has been convicted of an offense may be sentenced to pay a fine which does not exceed:

Section 50.10. Imposition of fines. 1. Ability to pay. In determining the amount and the method of payment of a fine, the court shall, insofar as practicable, proportion the fine to the burden that payment will impose in view of the financial resources of the defendant. …

2. Fine alone. When any other disposition is authorized by statute, the court shall not sentence an individual to pay a fine only unless, having regard to the nature and circumstances of the offense and the history and character of the defendant, it is of the opinion that the fine alone will suffice for the protection of the public.

(a) The defendant has derived a pecuniary gain from the crime; or