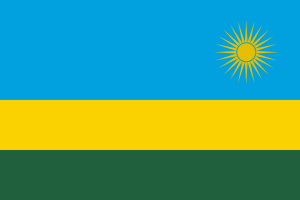 Rwanda, officially the Republic of Rwanda, is a sovereign state in central and east Africa. Located a few degrees south of the Equator, Rwanda is bordered by Uganda, Tanzania, Burundi and the Democratic Republic of the Congo.

The Constitution of Rwanda, adopted in 2003, has several provisions that may impact the legal rights of LGBT citizens. For example:

Article 11: All Rwandans are born and remain free and equal in rights and duties. Discrimination of whatever kind based on, inter alia, ethnic origin, tribe, clan, colour, sex, region, social origin, religion or faith, opinion, economic status, culture, language, social status, physical or mental disability or any other form of discrimination is prohibited and punishable by law. Article 15: Every person has the right to physical and mental integrity. No person shall be subjected to torture, physical abuse or cruel, inhuman or degrading treatment. Article 16: All human beings are equal before the law. They shall enjoy, without any discrimination, equal protection of the law. Article 22: The private life, family, home or correspondence of a person shall not be subjected to arbitrary interference; his or her honour and good reputation shall be respected.

Non-commercial, private, adult, and consensual homosexual relations are not illegal. The age of consent for any sexual act is 18.LGBT Rwandans, however, have reported being harassed, blackmailed, and even arrested by the police under various laws dealing with public order and morality.

On 16 December 2009, the national parliament debated whether to make homosexuality a criminal offense, with a punishment of 5–10 years’ imprisonment. This legislation was similar to the controversial anti-homosexuality bill in the neighboring country of Uganda. Justice Minister Tharcisse Karugarama, however, condemned and refuted reports that the government intended to criminalize homosexual acts, saying that sexual orientation is a private matter, not a state business.

TEXTBOOK PROGRAMME  2015 CALL FOR APPLICATIONS DEADLINE: 26th August 2015 The Council for the Development of Social Science Research in Africa (CODESRIA) is pleased to announce its programme for the publication of textbooks for use in African un[...]