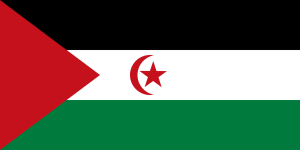 Western Sahara is a disputed territory in the Maghreb region of North Africa, bordered by Morocco to the north, Algeria to the extreme northeast, Mauritania to the east and south, and the Atlantic Ocean to the west. Its surface area amounts to 266,000 square kilometres (103,000 sq mi). It is one of the most sparsely populated territories in the world, mainly consisting of desert flatlands. The population is estimated at just over 500,000, of whom nearly 40% live in El Aaiún (also spelled Laâyoune), the largest city in Western Sahara.

Being 80% controlled by Morocco, Moroccan law is thought to apply.

Any person who commits lewd or unnatural acts with an individual of the same sex shall be punished with a term of imprisonment of between six months and three years and a fine of 120 to 1,000 dirhams, unless the facts of the case constitute aggravating circumstances.

In November 2006, it was reported that homosexual acts with or on minors are taken into consideration as aggravating circumstances.

In August 1999, a report affirmed that a penalty of between six months’ and three years’ imprisonment and additional fines can be imposed for “lewd or unnatural acts with an individual of the same sex.”