Ghana Police, on Friday 20th May 2021, issued a statement announcing the arrest of 21 LGBTIQ activists in the North African state. According to the press release, he 21 who consisted of 16 females and 5 males were picked up from Nurses and Midwives Hotel, Ho where they had gathered for a conference.

Rightify Ghana, an organization that works with minorities stated that the group had congregated to learn how best to document and report human rights violations being experienced by LGBT+ Ghanaians. 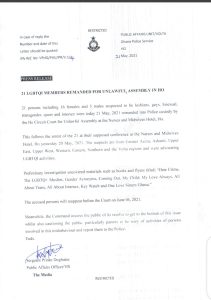 The 21 LGBTIQ identifying persons who hail from different regions of Ghana were booked into police custody by the Ho Circuit Court and charged with unlawful assembly. The Police in their statement, called on the public to report any suspected LGBTIQ person for immediate arrest. The Ghanaian Police has this year continued to make headlines for witch hunting LGBTIQ persons.

In March 2021, they arrested 22 individuals at a birthday gathering claiming that the event was a lesbian wedding although all attendees maintained that it was just a birthday celebration. The month prior, the commissioning of LGBT+ RIGHTS GHANA, quickly turned into a subject of contention.  Many asked the government to shut the shelter down with anti-gay crusader Moses Foh-Amoaning taking the lead and calling for the organization heads’ arrest.

The global community has now come together to raise further awareness on the happenings in Ghana and are calling on all relevant authorities to push for the release of the arrested 21. An online campaign under the hashtags #FreeThe21 and #GhanaianQueerLivesMatter is running to mount pressure on Ghanaian authorities.