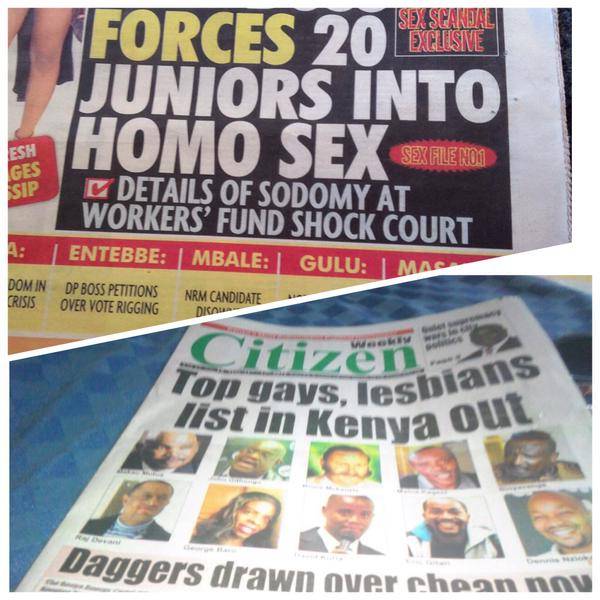 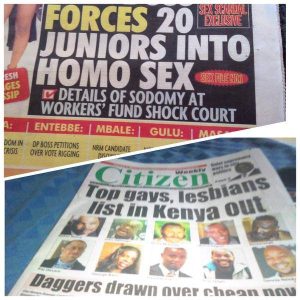 The East African mainstream media has fallen back  to outing LGBTI persons within the region; Ugandan tabloid Red Pepper this morning accused a top NSSF official of forcing her subordinates into nonconsensual intercourse while Kenya’s Citizen Newspaper released an article detailing people they referred to as  ‘top homosexuals’.

The Citizen article targeted Kenya’s top activists and critics within the community assert that this was a move to discourage or altogether stop the advocacy work being done in the country.

“The article was clearly written to instigate violence towards the LGBT community and activists in particular but that won’t stop us from fighting for our rights. We shall not be cowed or intimidated. Some of us are openly gay but that does not mean anyone can just bad mouth us and I know the lawsuit might be on the way. One thing I would like to assure everyone is that if there is one thing that gays are good at is winning a court case,” said George Barasa, a Kenyan gay rights activist on being asked about his thoughts on the article.

Many people within the community agree that this latest publication may result in a law case as many fundamental human rights have been abused. The author on his blog explained that the article was a backlash after the gay community demanded that Vice President William Ruto apologises for his comments that insinuated Kenya would not tolerate homosexuals.

The conventional media, with such publications, answers the question we are often times asked. Such periodical articles are the very reason Kuchu Times and Bombastic Magazine were put in place; as they continue to disrespect people’s privacy on grounds of their sexuality and gender orientation as well as spread hate propaganda within the general public, we also continue to advocate for the rights of LGBTI persons who have been subjected to such unfair treatment.

In an unbiased world, every individual has a secret but the media has not made it their life’s mission to expose such confidential information; then why they continue to do this to only LGBTI persons is a question one cannot fully comprehend.

What should be realized however is that most people within the community do not like staying in the closet but are subjected to live this way by the homophobic society in which we dwell and such uncalled for outings are a perfect example of the media infringing on citizen’s privacy.

Also time and again, this marginalized community has tried to prove that before their sexuality and gender orientations, they are human first. They are also responsible and productive members of the society but all this does not seem to appeal to the press as they continue to witch hunt them and expose their identities even though they are well aware that such revelations automatically put their lives at risk.

Tabloids have more frequently than not released the particulars of people they suspected to be gay, their residential addresses, preferred hangout spots and where they work. History has proved that this is a wrong approach; a renown LGBTI rights activist David Kato was clobbered to death with a hammer after The Rollingstone  exposed him as a ‘top homo’ (whatever that means) under the headline ‘Hang them’. Such incidences where the media has incited violence to the point of death should serve as a lesson not to put other people’s lives in danger but not in Africa.