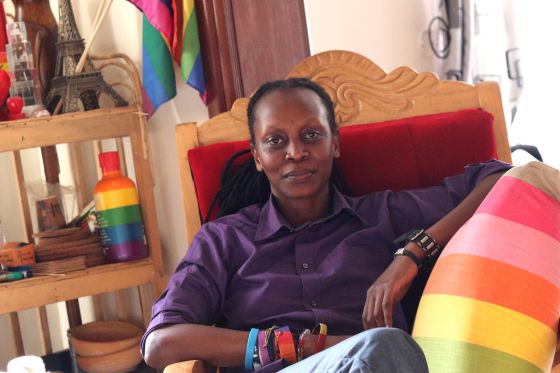 "What I'm doing right now is forbidden. This interview is illegal, I'm committing a crime. The police could arrest me and put me in jail, "says Kasha Jacqueline Nabagesera, a Ugandan lesbian activist who fights for the rights of the LGBT community.

State homophobia revives every few months in Uganda, placing gay people in the shadow of a conservative and hostile society towards them. In December 2013, Parliament passed a law that increased jail terms for homosexuals, with life imprisonment included and even the death penalty was raised in cases of recidivism or for people with HIV.

Ugandan President Yoweri Museveni commissioned a report to try to justify this anti-gay legal initiative, which concluded that homosexuality "is not genetic", but an option derived from "abnormal" social behavior with a source marked by Education received during childhood, and therefore, a "correctable" defect.

Following this report, the president ratified the law in February 2014, but in August the Supreme Court overturned it by a procedural failure during the parliamentary process, which was interpreted as a cession to the pressures of the international powers.

"The government defines the gay movement as something insane and evil. They compare us to terrorists. They have a black list of dangerous homosexual people, among whom I am. We are accused of several crimes, the most serious is to promote homosexuality. Our faces are published in several newspapers of the country as wanted persons to be found and condemned. People are afraid. You have to live on the sly and be very careful, "says Kasha at home. She lives in an isolated place and moves in a car with dark polarized windows so no one can see her. She is always accompanied by her friend and bodyguard, a heterosexual boy she has known since they were little.

The Government of Uganda has a new draft law on the table to replace the repealed law. The text provides that homosexual persons can be punished with up to seven years in prison. The approval of this law is being studied despite the fact that the Criminal Code considers illegal the imprisonment of gay people. The project also punishes any "promotion" of homosexuality, as well as organizations in defense of the rights of the LGBT community, meetings of more than two people to exchange information or broadcast on the Internet.

According to the current report of the International Association of Gays, Lesbians, Bisexuals, Trans and Intersexuales (ILGA), homosexuality is illegal in 79 countries of the world; Africa is the most homophobic continent.

"I do not even remember how many times I've been beaten and they've tried to rape me to find out what I really am," said Kasha, dressed in a loose shirt and leaning against an armchair. "My family knew that I was different since I was a child. I never left the closet, I was always openly gay. But as a child, I did not even know what lesbianism meant. I wrote letters to the girls that I liked and they expelled me from the schools. They said they had demons inside my body and they would get me out of the country. It was in college when I discovered that being gay is illegal in Uganda. They even had me sign an agreement stating that I had to keep a distance of 100 meters with the women and that I could not talk to my colleagues. They also threatened to expel them if they spoke to me. Luckily, my family was very open-minded and gave me lots of support. And I wanted to take advantage of that advantage to help those who do not have it so easy. "

Kasha is director of the NGO Freedom and Roam Uganda (FARUG), in struggle for the freedom of gender in its country. Her career as a human rights activist led her to chair the Gay Pride march in New York in June, a symbolic place where the Stonewall riots in June 1969 were commemorated. Gave a series of spontaneous and violent demonstrations in protest against a police raid on a pub known as Stonewall Inn, located in a neighborhood in New York. These riots marked the beginning of homosexual liberation and helped establish the rights of the gay community in the United States.

Kasha was invited to lead the famous gay march of the US city for her outstanding work in Uganda, being the organizer of this same event in Kampala in 2012, defying the law and going out to celebrate her longed for freedom. "I wanted to see if the LGBT community would support me. I created a page on Facebook at three in the morning and waited to see what happened. The response was incredible, so we armed ourselves with courage and went out together. We marched for three hours and then the police arrived to arrest us. I remember being very happy and that made the authorities very angry. Nobody cared if they stopped us, we had. We were so euphoric that we even brought the rainbow flags to the agents. The next year,

Tirelessly, Kasha is continuing with new initiatives to give visibility to homosexuals in his country and to intimidate the Government so that its equality and freedom are recognized.

"It's very hard for me to find a job. I survived thanks to my brother and my mother's inheritance. Now I am producing a free independent magazine for the gay community. I already have 50 registered volunteers who write their stories. It is a totally illegal and risky act for me. I feel at home and receive calls of all kinds: gay people who are happy to be able to speak, people who insult me ​​and threaten me, the police saying they would track me down ... But I only have to protect myself. My colleagues have suggested that I disappear from the country, but I need to stay to evaluate the impact of the campaign. My lawyers tell me not to leave alone and not to distribute the magazine on the street personally. We must do it at night, when it is not so easy to see us, "he explains.

It is a courageous and reckless act to convince society that their sexual choice is a natural matter and not a criminal behavior. The Ugandan media often publish lists with photographs and names of homosexual people or attitudes likely to be homosexual, demanding that they be captured and even hanged. There are cases of activists who have been tortured and killed in the country. One example is that of David Kato, who was hit with a hammer to death after the Red Pepper newspaper published the list of the country's 100 "top homosexuals", where it was named.

The Bombastic Magazine , edited by Kasha, wants to combat the silence imposed on the gay community and the manipulation and discrimination spread in the press of their country. The 75 pages of the publication contain dozens of articles on actual experiences of Ugandan homosexuals told by themselves.

"The younger generations are very homophobic in Uganda. Much is the fault of the schools, where they give talks of more than five hours talking about the evils of homosexuality washing the brain. In addition, Uganda is a very religious country and church preachers speak with much hatred towards us. But we have decided to speak for ourselves, to say that we are here and that we exist, and to end fear and prejudice. "