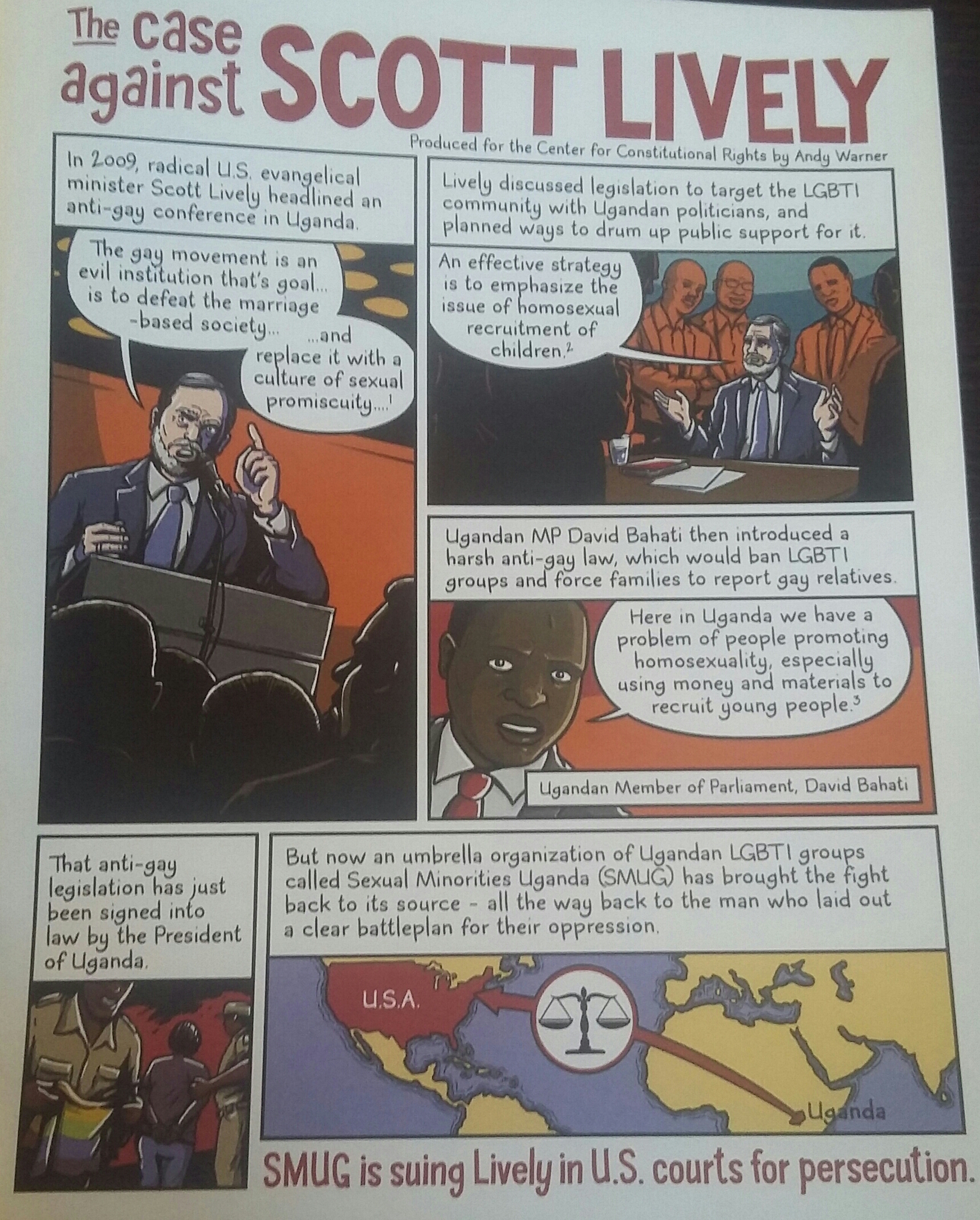 The United States District Court for the district of Massachusetts on 5th June 2017 dismissed the SMUG VS SCOTT LIVELY case on technicality grounds; the ruling pointed out the fact that the court could not try Scott Lively because it did not have the jurisdiction as his crimes were not committed on US soil.

The court however agreed that Scott Lively indeed aided and abetted a vicious and frightening campaign of repression against LGBTI persons in Uganda.

“Defendant's positions on LGBTI people range from the ludicrous to the abhorrent. He has asserted that "Nazism was in large part an outgrowth of the German homosexual movement," 1 and that "[i]n seeking the roots of fascism we once again find a high correlation between homosexuality and a mode of thinking which we identify with Nazism."2 He has tried to make gay people scapegoats for practically all of humanity's ills, finding "through various leads, a dark and powerful homosexual presence in . . the Spanish Inquisition, the .. French 'Reign of Terror,' the era of South African apartheid, and the two centuries of American slavery. " 3 This crackpot bigotry could be brushed aside as pathetic, except for the terrible harm it can cause. The record in this case demonstrates that Defendant has worked with elements in Uganda who share some of his views to try to repress freedom of expression by LGBTI people in Uganda, deprive them of the protection of the law, and render their very existence illegal. He has, for example, proposed twenty-year prison sentences for gay couples in Uganda who simply lead open, law-abiding live,” reads the ruling in part.

When we contacted, the Executive Director of Sexual Minorities Uganda Dr Frank Mugisha, he asserted that the ruling was a win for both SMUG and Uganda’s LGBTI community as a whole. “The judge agrees that Scott Lively indeed committed the crimes we said he did. He aided persecution and increased stigmatisation of LGBTI Ugandans. It is sad that the case has been dismissed on grounds of jurisdiction but we must also celebrate having been able to challenge people that further persecution and stigmatisation of minorities but more-so realise that he has been labeled the criminal that he is,” Dr Mugisha said to our reporter.

To highlight Dr Mugisha’s point, the ruling further states that ‘Anyone reading this memorandum should make no mistake. The question before the court is not whether Defendant's actions in aiding and abetting efforts to demonize, intimidate, and injure LGBTI people in Uganda constitute violations of international law. They do. The much narrower and more technical question posed by Defendant's motion is whether the limited actions taken by Defendant on American soil in pursuit of his odious campaign are sufficient to give this court jurisdiction over Plaintiff's claims. Since they are not sufficient, summary judgment is appropriate for this, and only this, reason.’

Dennis Wamala, who sits on the SMUG Board of Directors echoed Dr Mugisha’s thoughts. He says this case has set precedence in challenging people that continue to abuse the rights of LGBTI Uganda’s and those that heighten the safety risks for people who are already facing stigma and prejudice.