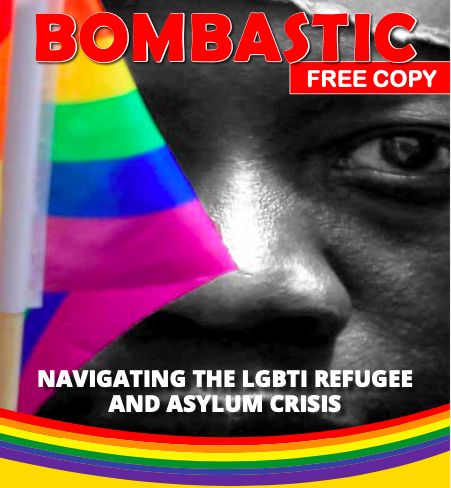 In my working career that now spans over three decades I have worked with many vulnerable and marginalized groups (handicapped children, psychiatric patients, migrants, sex-workers, survivors of domestic abuse etc. etc.). Nevertheless, I want to argue that LGBTIQ refugees are often in exceptional difficulties.

If you work intensively with these groups, reasons for this become clear & I have listed here the reasons known to me.

It is a common misconception that only people who are in a sexual relationship with a same-sex partner run a risk in countries who prosecute gays. There are many other moments when someone can be outed or labelled as being gay that also carry great risk.

-Gender unspecific behaviour or appearance, this can start at a very young age.

-Suspicious lack of interest in the opposite sex.

-Problems in the bedroom for couples that were forced to marry

-Involuntary or unchecked spontaneous reactions to the same gender.

-Refugees from countries that have a reputation for persecuting gays (e.g. Uganda or Jamaica) are often labelled as gay as soon as their background is known.

As being LGBTIQ is often not as obvious perceptible as (say) being a certain gender, skin colour, having a handicap of coming from a certain country…. there is a huge fear among other people to get stained by the label ‘while they have or want nothing to do with it’.

-People who are not gay can be labelled “gay” to vilify them and destroy their reputation or to rob them of their possessions.

-Also there exists a group of people that are ‘guilty by association’: parents, non-gay partners of LGBTIQ who were in a heterosexual relationship (Because the LGBTIQ were forced, made an effort to hide or believed that they could to get ‘cured’)

-I want to draw extra attention here to the existence of a huge group of bisexual people in any given society. Because that is true for them, they may have the misconception that everybody is attracted to both genders and can use willpower to suppress attraction to same sex partners.

There is a close relationship in societies between lack of knowledge and fear for people who are LGBTIQ. In many places where LGBTIQ are killed - strong beliefs, that are not informed by any true knowledge and that have not been corrected since dawn of time, are in place: LGBTIQ are associated with ghosts, sorcery and witchcraft and are considered morally despicable.

Our position in society (and sense of identity and self-worth) is defined by an overlap of social networks we can belong to and a diversity of roles we can play.

An individual can belong to:

-this group of friends

-this group of peers of the same age

-this sports club or activity club

-this social gathering (e.g. a regular night in a bar)

-this cultural tradition or ritual

Many refugees will lose contact with some networks and peer-groups. Sometimes this loss will be a violent one, where the person is really thrown out and asked not to come back.

The difference with LGBTIQ in societies of concern is:

-The vastness and the generalization of the disaster: they will lose all ties with all networks

-The violence with which this loss is affected. Separation will always go in a violent and disrespectful way and they will always be at the receiving end.

-The blankness of the situation after the loss: they will rarely be allowed to compensate by getting the possibility to be accepted into new networks.

The items mentioned under point 0,1 and 2 are contributing factors in this ostracizing of LGBTIQ.

LGBTIQ conditions manifest themselves outside the control of the individual. This means that people will have strong emotions and perceptions that are taboo in society, often unwanted by the individuals themselves and at the same time unavoidable. People can feel possessed or wonder if they are going crazy. They can also feel deep conflicts about things that other people just enjoy and take for granted: their physical appearance, sexual desire, the need for intimacy.

It takes a long process for gays to overcome the damage that is inflicted upon them by the ignorance of society, because there are many hints at guilt: that LGBTIQ identity would be a choice and is somehow self-inflicted. Even worse it would be connected to being a sinner and to being possessed by evil forces (ghosts). However much not of their own choice, being LGBTIQ is something people often (for a period of time) regret, are deeply ashamed of, and angry and fearful about.

This pain is often only soothed and partially overcome when the person succeeds in finding love and satisfying sexual relationships.

Banishment and condemnation will often happen at a young age and this means that LGBTIQ don’t have the chance to build up as much resources as other people, to draw from in times of stress:

-no self-esteem/ esteem within society

-no or negative (dangerous) ties to the past

LGBTIQ often live in squalor and poverty, this makes it harder for them to flee successfully.

Because being gay is seen, by those primitive societies that condemn it, as being completely immoral and ‘pure evil’ others feel often deep fear and disgust for gays.

This is exacerbated by notions of foreign influence (“terrorists”), illness (HIV) and Satan (witchcraft/ superstition).

LGBTIQ can also trigger feelings of sexual jealousy (they risk it all for true love), uncertainty (by people who are not 100 % sure of their own sexual identity or performance) or inadequacy in others (e.g. parents, partners, mentors, religious leaders), and so unleash all the powers that go together with sexual taboo’s, personal frustrations and fears for deviant energy.

This volatile emotional cocktail will often result in extreme physical violence and (corrective or punitive) rape. In cases of rape the victim will often hear that this is what they have brought upon themselves and even should like. Victims will rarely have trustworthy authorities to help them after such violence, we know that even medical staff can deny support.

We know furthermore that LGBTIQ who are found out are also often driven away from their peer groups (school, family) with extreme violence. There are no exact numbers available but mob-justice and honour killings are a common cause of death.

Because all other networks reject them LGBTIQ’s risk to end up with a very one-dimensional identity that is only defined by their sexuality, and this is also how their surrounding society perceives and identifies them.

The body is the last thing that poor people own and ‘sexual identity’ is the only identity that is left for LGBTIQ’s. Because of this many end up as sex-workers. This is the last and only means of survival.

Other forms of sexual exploitation are connected to forced marriages (of both men and women).

On top of that there exists exploitation that results from sexual ignorance (e.g. someone will find their first same sex partner and be so happy about it that they don’t see that that person doesn’t have a good character). As the society at large doesn’t provide information or safe places to learn and experience - people get into danger when they try to find out nevertheless.

Falling in love and (unwillingly) expressing signs of that (like bashfulness) is already an extremely dangerous act. Starting a relation expands the risks in many ways: confessing feelings is a dangerous act and forming a couple can create more moments of possible exposure.

On top of that a partner may betray you when the relationship is discovered or if you want to leave. Also having gay friends may communicate the message to society that you are gay.

Last but not least: because love relationships cannot be registered they don’t receive any form of legal protection: people have no right to look after a loved one when that person is ill or has died. There is also no inheritance, meeting the family or the possibility to profit from someone’s name and reputation. Couples are not always kept together when people who are refugees are transferred etc.

Aversion against and ignorance about LGBTIQ is not confined to the places people have to run from. It is unfortunately often deeply ingrained in the hearts and minds of people appointed to help them or protect them. Even people who are willing to accept gays may still hold old-fashioned, unhealthy or hostile notions e.g. that “people can be gay but should not practice relationships as that is against religion”.

This should be an extra reason to monitor LGBTIQ’s more closely when they are in contact with our organizations.

Given the host of complex and combined problems LGBTIQ refugees face and have faced - a thorough training on LGBTIQ specific needs and support is absolutely necessary for staff-members willing to cater to their needs.

In theory the UNHCR is fully aware of the specific needs of LGBTIQ refugees:

Providing protection and solutions to LGBTI refugees falls directly within UNHCR’s core mandate. As any other person of concern to UNHCR, LGBTI refugees are entitled to protection and to be assisted without discrimination. UNHCR’s Age, Gender and Diversity Policy calls on all staff to understand and integrate age, gender and diversity sensitive work practices. UNHCR offices must develop a thorough understanding of the circumstances of LGBTI refugees, and ensure that their human rights and refugee rights are met without discrimination. Safeguards must be put in place to prevent any action from inadvertently increasing marginalization, vulnerability, exclusion and stigmatization that may put LGBTI refugees at further risk or that could hamper LGBTI refugees accessing protection and solutions”. UNHCR, Age, Gender and Diversity Policy, 8 June 2011

Of course, the effectiveness and workability of these clearly good intentions depend entirely on clear and well-defined practices. These should outline in which ways special needs are identified, monitored and met.

As recently as November 2015 (interview with the BBC) Catherine Hamon, the deputy head of protection for UNHCR in Kenya admitted that UNHCR’s own staff are hostile to LGBTiQ asylum seekers. Some staff in Kenya have openly stated that as Christians they could not work with, or talk to, a gay man. Ms Hamon also explained, "It’s difficult for people to go beyond all the prejudices they have. And this is what we face with our own colleagues”.

From this follows logically that training, monitoring and screening for all staff, but also for prospective businesses to work with LGBTIQ is absolutely necessary.

Archivist with an interest in documenting facts re. refugees

I am spiritually affiliated with the smallest church in the Netherlands: the Society of Friends (Quakers)