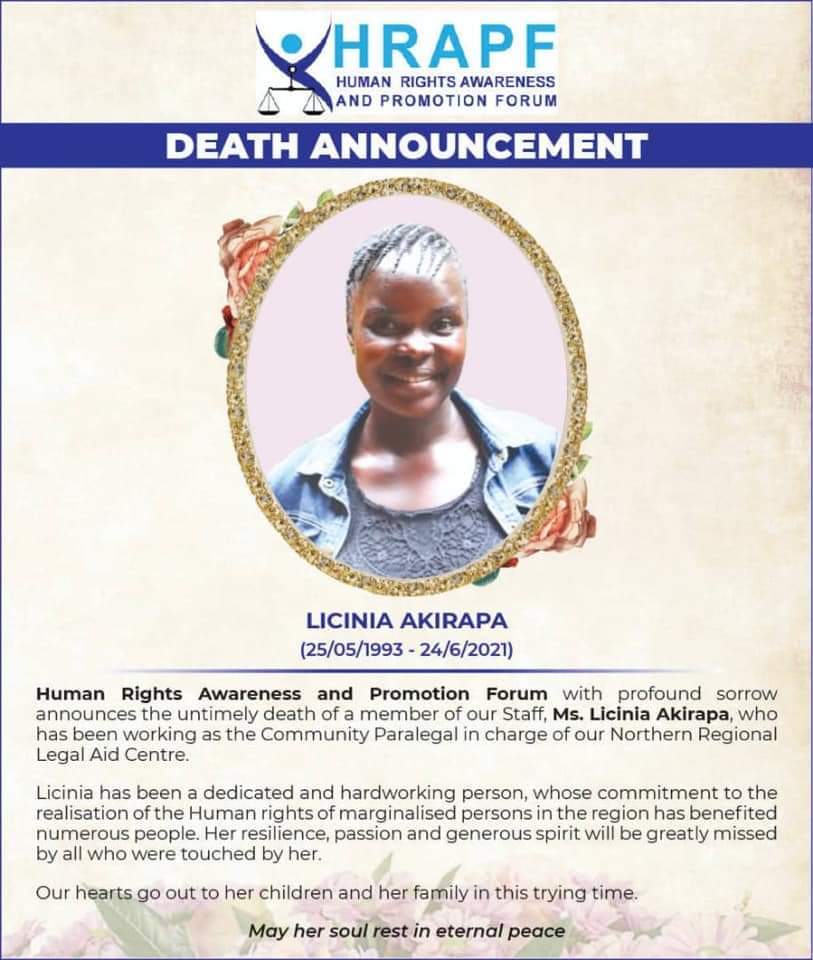 With deep sorrow, Kuchu Times Media Group joins Human Rights Awareness and Protection Forum-HRAPF  and Health and Rights Initiative (HRI) to commiserate the violent death of one of their staff, Licinia Akirapa. Licinia worked as a community paralegal based at HRI and HRAPF’s regional legal aid center in Lira. She was found hanging on a mango tree but there are allegations that it was death as a result of domestic violence.

According to HRAPF, the perpetrator was arrested on the morning of the murder and placed under protective custody. At that time, the community thought it was a suicide and police was afraid he would harm himself. When it changed to a murder upon investigation, he was moved to another police station.

During the online memorial today, mourners shared lovely memories about the deceased:

“Thank you, HRAPF, Licinia’s friends and staff. I know HRAPF will help us get justice for our loved one, who was just taken from us like this on exact oppressions that we are fighting against! HRI friends and colleagues, let’s stay strong. We shall get through this.” Tina P’Ochan (Board Chair, HRI)

Renowned feminist Fridah Mutesi who worked with her on a project says, “I worked with Licinia on a campaign against gender based violence. She was dedicated and lively. One wouldn’t anticipate that such a powerful Human Rights Defender could succumb to the vice we were working hard to end. When I heard of how she died, I was shocked and it took me quite some time to process the information. May she rest in peace.”

“UGANET and ICWEA stand with you HRAPF and HRI at this time of losing, a loved and hardworking Licinia.  The testimony of her life is one of great values and a true human rights defender.  She lives behind an example for us all to cherish and follow.” Says Dorah Musinguzi

Flavia Zalwango HRAPH’s legal counsel that worked closely with Licinia tells us,” It’s such a pity to lose a loved one to violence that we fight against every day. When I first met her, I was marveled at her willingness and diligent hard work to get things done. May her soul rest in peace.”

“She will be remembered as a passionate women’s rights activist, whose hard work and resilience ensured justice to prevail not only in Lira but other parts of Northern Region. Her work made an impact and therefore Northern Uganda became a better place to live.” Says Maureen.

Josephine says, “She left no stone unturned when it came to achieving justice for all. Through her friendship and sisterhood, Licinia will be remembered as a heroine in championing human rights for all women. She will remain irreplaceable because she did her work without any reservations.”

MAY LICINIA REST IN POWER.