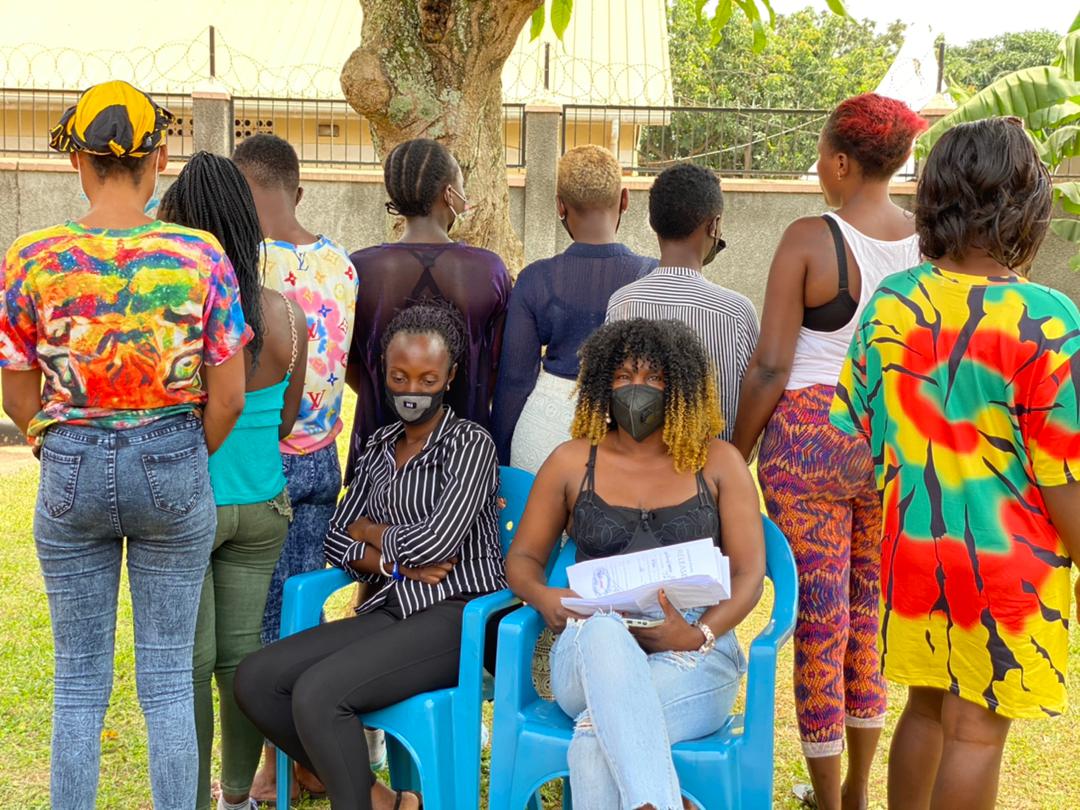 Lady Mermaid Empowerment Centre (LMEC) secured the release of 8 sex workers on Thursday 29th July 2021 who were earlier on arrested by police in Kamwokya- Kisenyi II last week on charges of breach of COVID19 restrictions.

In a phone conversation with Kuchu Times Magazine, a Community Paralegal and Executive Director at LMEC, Sanyu Hajjara Batte narrated that due to the restrictions imposed within the COVID-19 related lockdown, sex workers who only know to earn a living from sex work were arrested right before curfew time on the evening of 26th July at around 5:45pm. The police apprehended and detained them at Kira road police station. On Wednesday, LMEC pursued the case until they were all released. “It wasn’t easy to secure police bond for them though we managed. We are still following up on the case to make sure the charges are dropped,” Hajjara said.

Hajjara further noted that despite LMEC’s drive to ensure nutritional support specifically for key populations living with HIV, the food relief isn’t enough to last them for a viable period of time.

“Yes, we distributed the food but it could only last them a short period of 1-2 weeks. As we proceed to distribute to others that need the same support, those who received earlier have run out. So because of the situation and the impact caused by the lockdown, they are forced to go back to the streets and do sex work to continue provision for themselves and families. The girls, some enrolled on ART and others on PEP at our DIC also said that they can’t adhere to these mediations on empty stomachs. This lack of adherence will greatly affect HIV programming in the country.”-Hajjara

Hajjara spoke about among other challenges including; mental health issues faced by both for KP leaders and community members who have been victims of human rights violations.

“As we have managed to avail the those who had been arrested with psychosocial support of their personal choice. But let’s not ignore that also us as leaders, we are under so much pressure to deliver and look out for our people. They have great expectations from us. Donors changed their key funding priority areas and strategies because of the lockdown and therefore, many are times that our hands are tied to help them,” Hajjara explained.

In recommendation of what should be done to curb the increase of human rights violations during this partial lockdown, Hajjara suggests that more attention should be focused on sensitization of law enforcement officers and the media.

She said, “We should continue to sensitize the police and media using online avenues and spaces that we have right now and we stress respect of human rights of sex workers and other key populations on arrest and detention. The victims were paraded by the police infront of media. If we hadn’t intervened fast enough, their images would have quickly been published widely in the news. They were arrested with some other ghetto guys who were smoking their marijuana. They could have slapped them with extra charges in relation to drug use.” Meaningful dialogues with stakeholders and other key players will also play a crucial role in bridging the gap between KPs and the government. “You realize with all the government COVID relief (both food and Nabanjja funds) that has come through, many of us have been excluded by local council authorities, even with the mass vaccination going around. This will help us reach the government so they can prioritize and pay attention to key populations.”

Hajjara urges KP led organizations to integrate economic empowerment with HIV programing within communities which will empower and encourage KPs to start up small business ventures that can sustain them during such difficult times as well as take full advantage of online spaces to ensure timely service delivery to the doorstep of those in need. “This can also work as a recovery and resilience strategy post COVID19 lockdown as we transition into the new normal.”