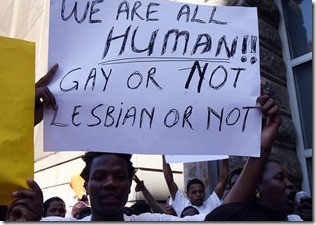 The fight against homophobia continues but sadly, more African countries continue to toughen and stand by their laws against LGBTI people. Just last week the Health Minister in Malawi Jean Kalilani said the country will not change its laws against homosexual acts. Kalilani made the remarks as the government applied for a grant amounting to 257 euros from the Global Fund. Quizzed on whether some of the money will be used to improve the situation of the LGBTI community in Malawi, the minister said the grant would be channeled to the fight against HIV, tuberculosis and malaria.

Our in house experts exert that sidelining homosexuality issues is a direct sabotage towards the fight against HIV in the South East African nation. However, Malawian leaders insist they will not change the laws and homosexuality will continue to be criminalized. The LGBTI community in Malawi is greatly affected by HIV and sidelining them based on their sexuality will only increase the spread of the deadly virus. It is a self-defeating strategy to exclude the very people that are carrying and spreading the disease the government is waging a war against.

In the past, the LGBTI in Malawi were actively arrested and imprisoned based on these laws that have forced many to live in fear. It should be remembered that in May 2012, President Joyce Banda promised to look into the abolition of laws against homosexuality but made a U turn shortly thereafter declaring the nation was not fully ready to embrace minor sexualities.

Same sex relationships in Malawi were first criminalised in 1891 and suspects face up to fourteen years in prison.