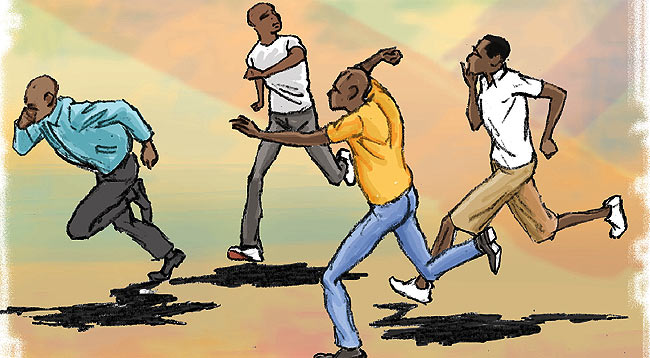 It’s almost 2 months since the nine young gay men were released on police bond after being held in police custody for five days in western Uganda.  Following the visit of medical team from a hospital’s STI clinic that carried out a screening, testing and treatment visit to a rural district. The outreach was in collaboration with Rainbow Health Foundation an organization that serves sexual minority populations in rural western Uganda.

Lawyers worked hard to see to their release, but more waited for the 9 young gay men.  Having camped at the police station for days their release was a happy moment for all, Derrick (not real name) “At last am out, had not anticipated any of this, days had become longer and nights colder. Day in day out, we were losing hope.”  Happiness was in the air as all congratulated each other.

The real taste was yet to come, news reached very first upon their release, villagers were not happy. They all returned home to the same place that haunted them. On arrival I countered a group of men who came near house at night, we won’t let you stay they said to me, Muhima narrated (one of the nine). Another was called to a family meeting; a decision was reached not to step in my family home ever again, with no means of survival and no place to live. The nine have been living on the mercies of friends.

I went to my former employer seeking to have my job back, only to be told that we can’t and won’t work with a homosexual, Nathan said. My wife of 7 years packed my bags and sent me away, saying that I have caused her and the children so much pain and suffering due to my sexual escapades another one explained.

After their release the nine have had rough times, integration back to normal life seems a far-fetched ideal to them. The case is not closed yet; they are mandated to keep reporting to police. I feel am not worthy living; this has become a common phrase among the 9 young gay men. Help is needed, ranging from shelter, food, relocations and means of integrations.

Donations are still needed! These young gays urgently require shelter, food and small minimum capital help to integrate in new, safe environments and support for them to acquire small loans for survival. RHF activists are prepared to assume these responsibilities, but for the costs. We appeal to you to be generous. Donate through PayPal (www.paypal.com) all you need is an e-mail address and a credit card to make a secure donation directly to RHF’s PayPal account. On the PayPal site, click on “Send.” Then enter the address “donate2rhfm@gmail.com” and the amount you wish to contribute. You can also e-mail rainbowhealthfoundation@gmail.com for any further inquiries.