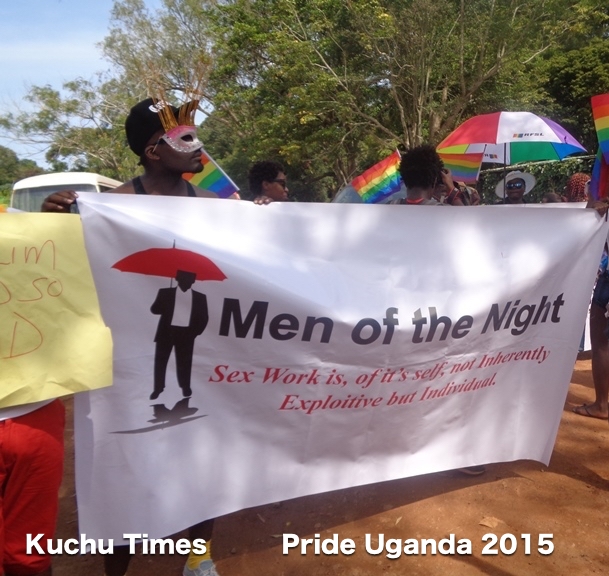 UPDATE:
An Indiegogo campaign has been launched to fund the second printing of Bombastic.
Click below to find out more.

Click Here to Visit the Indiegogo Campaign by IGLHRC

Eight months of waiting and swiftly the days dwindled down to just mere hours. The count down for the long awaited Pride Uganda 2015 festival themed WE ARE FAMILY was nearly over; but now, the anticipation was replaced by excitement and nostalgia.

It was officially time to kick off the fourth Pride in Uganda. Day one of the festival brought a new idea that the organizing committee had incorporated into the festivities. The cocktail event was held at one of the uptown bars within Kampala and as the revelers and invited guests streamed into the open air location, it was clear to see the invigoration and dedication to the cause that was bringing them together.

[easy-tweet tweet=”“We are glad everything went as planned and we are very grateful to all the people and organisations that supported us to pull off this festival. We are also thankful to the people for turning up every day. It’s been an overwhelming yet humbling experience to serve my community in this capacity. However we should remember that Pride carries on beyond the festival. We will all meet again at Pride 2016 and no matter what, we are family always.” ”  hashtags=”PrideUganda2015″]

The schedule for the next few days was delivered and the committee that had worked so tirelessly to put this year’s festival together introduced. With that, the guests were taken through a series of entertainment and I must say, watching old comrades catch up, ideas spring up on how to push the movement forward and people from different backgrounds, ethnicity and livelihoods unite for a common cause was a realisation that NOTHING will stand in the way of the LGBTI movement in Uganda.

With this kind of solidarity and dedication, they will do everything within their power to bring about the change they want to see- decriminalize homosexuality and have the state recognize sexual minorities as normal people with respected rights.

Day one brought together activists, allies, religious leaders that have fervently stood their ground in support of this movement like Bishop Christopher Ssenyonjo and many people from within the sexual minorities community.

With the excitement created by day one, it was clear that the Trans awareness event would be well attended the following day. The hosts Ice Breakers Uganda provided a hall for the discussions; all things trans were put on the table as the community tackled the health, social and economic repercussions of being transgender in Uganda’s homophobic setting.

Chaired by Kim Mukasa, the dialogues raised the challenges further faced by transgender but mostly focused on coming up with solutions to counter these. Several transpeople that had gone through a period of self-discovery, which often times comes with a phase that sees most lose their way and pick up bad habits like doing drugs, alcoholism as well as quit their jobs, shared their experiences and how they managed to get  back on their feet. By the end of the dialogues, it was clear an impact had been made; the mood was characterized by determination and a need to defy the stereotyping associated with trans people.

The organizers went over and beyond with the nights entertainment; the dancers were energized and their performances thrilling. The dinner provided by the night’s sponsors Freedom and Roam Uganda was the epitome of the night and as the night came to an end, the revelers joined in the dancing and jubilation to celebrate this diverse but united community.

Day three was the Mr and Miss Pride contest, arguably the most anticipated event of the festival and it did not disappoint. The contest attracted people from all factions of the LGBTI  community who were judged basing on their intelligence, confidence, talents as well as eloquence and knowledge on the movement.

All in attendance agreed that the LGBTI community in Uganda has immerse talent that has gone ignored for so long; the contestants put up marvelous performance acts and exhibited  a fashion sense that could benefit the fashion industry as a whole.

After three hours of the catwalk, fashion show, QnA and performing sessions, it was time for the judges to reveal the winners. Mahad Ntege, a transwoman who according to the judges had brought to the stage a different vibe with all her performances based on the Kiganda culture, was crowned the new Miss Pride 2015.

It was an emotional moment for Mahad as she was crowned by Bad Black, a vocal activist who had held the title for three years in a row.

The crowd’s favorite, transman  Adebayor Phiona was crowned Mr Pride as the small hall broke out in ululations. His energetic performances and need to make trans issues more prevalent hit home for most people and his crowning was the perfect way to end the night.

The day that everybody had been waiting for finally arrived as people braved the traffic jam leading to the venue outside the country’s capital. The Pride parade started at 4:00pm with the excited revelers displaying several banners and chanting. For one day, they could all be who they are without fear of being attacked or ridiculed and labeled insane or abnormal. The transwomen proudly wore their makeup and looked fabulous in their well thought out attires, couples hugged, and kissed freely and it was obvious all these people wanted was to live this way every day.

The Grand Marshals Dr Frank Mmugisha, Dr Stella Nyanzi, Joseph Kaweesi and Diane Bakuraira led the mammoth crowd singing, dancing and jubilating. The parade was held nearly a year after the Anti-Homosexuality law was nullified and whether that was coincidental or not, it was still significant to this community as they continued to march  for the millions of people who remain in the closet for fear of  the repercussions of living as an openly LGBTI person.

The day long beach party was all fun and games, entertainment, and enjoyment as it became apparent that the five day festival was soon winding down.

Sunday 9th August marked the end of Pride Uganda 2015 as the community gathered for one last night. The partying continued well into the night and with that, the community was inspired and refocused on the common goals.

“We are glad everything went as planned and we are very grateful to all the people and organisations that supported us to pull off this festival. We are also thankful to the people for turning up every day. It’s been an overwhelming yet humbling experience to serve my community in this capacity. However we should remember that Pride carries on beyond the festival. We will all meet again at Pride 2016 and no matter what, we are family always,”Richard Lusimbo the coordinator for Pride Uganda 2015 said of the festival he had helped put together.

In related news, the Ugandan main stream media in its typical predictable style did not turn up for accreditation to cover the five day event but still managed to publish stories on what allegedly transpired. According to one of the daily tabloids, hello!, the Uganda Police and other law authorities were not informed about the event and such publications could not be further from the truth. The organisers of Pride Uganda 2015 sought permission from all relevant authorities in the interest of the attendees’ security.

The tabloid went even further to publish pictures from previous pride festivals alleging they were taken at the recently concluded event and outed members of the LGBTI community in the process. We continue to condemn the mediocre journalism practiced by most Ugandan main stream media houses; such acts have not only caused havoc in the lives of the outed but also the community at large.

“This is the very reason Kuchu Times Uganda was started in the first place; to give the LGBTI community a media platform where they would freely express themselves and  more so be able to give accurate information to the wider community,” said Kasha Jacqueline Nabagesera who started both the media platform and Pride Uganda.

If you missed the live streaming during the Pride week, check out our TV and also watch more short programs and documentaries. If you are in Africa and want to share your story, through Radio, Television ,Magazine or Blog, send an email to editor@kuchutimes.com

All images and videos appearing in this this article are the exclusive property of Kuchu Times. The images qnd/or may not be reproduced, copied, transmitted or manipulated without the written permission of Kuchu Times.

Use of any videos or images as the basis for another story, concept or illustration is a violation of the International Copyright laws.