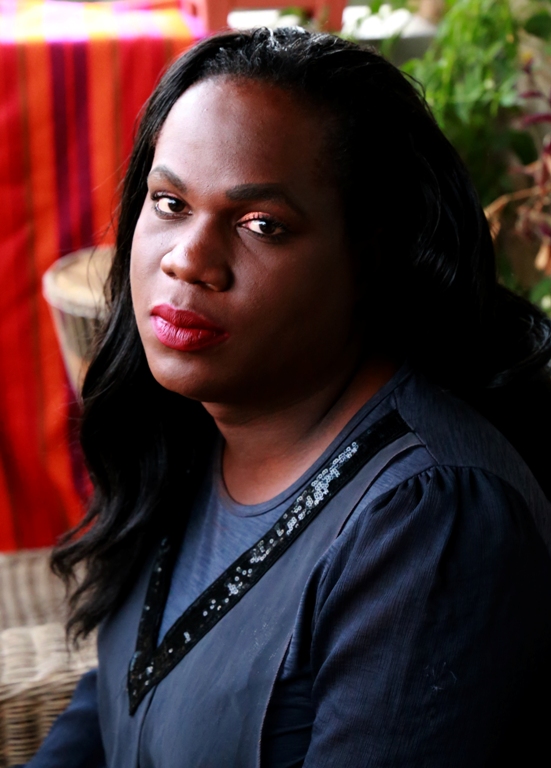 Cleo Kambugu, a Ugandan born transwoman currently based in Nairobi continues  to defy the norm; she was not shy about sharing her transition with the world and has since gone further to share her journey as a proud trans individual.

In 2014, Cleo who was born male, featured in her own docu-series titled the Pearl of Africa which chronicled her life as not only a trans person but also an LGBTI activist in a country greatly characterized by homophobia.

Recently speaking about the project that brought to light her trials, tribulations and triumphs, Cleo reminisced about her rather not simple past, “The journey of a thousand miles starts with making that one step, and putting one foot ahead of the other, and hoping against hope that something will come out of it. This was in 2012 in my university cubicle, with a laptop that was donated by my maternal aunt, sending out an SOS to the world to notice my plight and raise awareness about the plight of trans women out there. As serendipity had it, Jonny a millions miles away from Uganda heard that call, and did not pay a dumb ear. The difference between sympathy and empathy i have come to appreciate is that empathy is sympathy in action. He had never been to Uganda, he did not understand much about gender, and transness or Uganda, he knew it would be a rocky path. But while many other companies turned a blind eye, and raised all concerns about how dangerous it would be to film in Uganda let alone about such a controversial issue, he believed his gut, and as i had done, he took his first step into oblivion, hoping against hope that something would come out of this. And it did, and thus the pearl of Africa was born. I have often said that patient is over rated, important work never get done because people are so stuck in their comfort zone satisfied with their pseudo happiness. Existing but not quite living, surviving but not thriving. I refused to settle for second best. I refused to allow for yet another issue to be relegated to the realm of controversial issues to be discussed later, because it was too polarised a discussion to have now. And i had help along the way, people who believed in me, people with whom together we metaphorsed and grew each other. The pearl of Africa grew us, it had a life of its own, that is the thing about documentaries, they can not be scripted, and you never quite know where they will lead. I look back at this time and a few months later that i met Jonny as the moment that started a spark, a small beacon of ‘hope that would grow into The pearl of Africa.”

She went on to reveal the hopes she had in The Pearl of Africa as well as the potential it had to change attitudes and bring change to the world. “If you ask me if we are already there? if the pearl of Africa has met its goals, i would say no and i do not know. I believe that with you, the Pearl of Africa has the potential to evolve into some thing huge beyond Nelson and i, beyond Jonny and Rough Studios, to impact the lives of transgender people in Africa and all over the world, and indeed any one dealing with identity crises. I believe the pearl of Africa has the potential to spur a much needed dialogue and conversation on gender and sexuality in my country and the world over. There are things we have been taught to believe as common senses and not question ” the proverbial Newton’s question of why the apple fell from the tree”. I think The pearl of Africa has the power to help us question so many things we have taken for granted, and there is alot as a race, and as a species that we could learn from that. After more than two millennia of assistance on this planet, as a species we have lost our way, but as the old adage goes, when lost and when in need to find yourself, go back to the beginning, and unpack all and everything and how it came to be. That i believe is the role of this documentary. But that is not my take away message for you. i shot this video a week shy of when i had just been chased from home by Father who did not want anything to do with me, i had enrolled into a Masters class that i had not pain even a single penny for in tuition, and i was living off a budget of less than USD 20 per month. It is all i had. The months that followed suite, i got a World Bank scholarship to do my Msc in Molecular biology which catered for everything including a flattering stipend to go with. In the same month The pearl of Africa started shooting after i had been shunned by so many people that i approached to take a chance on our community. My take home therefore is that, whoever you are, wherever you are- and as cliche as this may sound- your dreams and aspirations are valid. No body can validate you apart from that reflection you see in your face. You have nothing to fear but your chains, that are hindering you to stop staring at that small gate, and accept crap, while you could take that one step into oblivion to find yourself and your inner purpose and to free yourself. I pray this speaks to someone, as there was no one to speak such word of encouragement in my life. To the Pearl of Africa!!!,” she continued.