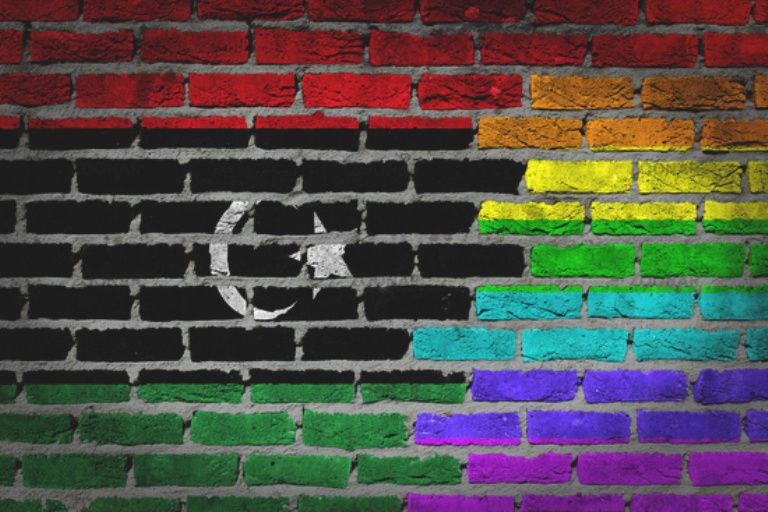 Libya, one of the most Islamic states in Africa has very harsh laws in regards to LGBTI persons. Same-sex acts and relationships in Libya are not legal- their Penal Code punishes homosexual acts with up to 5 years of imprisonment.

According to the Libyan law, any individual who commits lewd acts with a person in accordance with one of the methods specified in the preceding article shall be punished with a period of imprisonment of five years at most. There is no legislation in Libya that protects the rights of sexual minorities and, in case of violence and hate crimes against homosexuals, there is no law or legal act to protect them.

Violence and criminal acts against LGBTI people are more than welcome by society.  There is also no governmental or non-governmental organisations that protects sexual minorities’ rights. Furthermore, there are no legal proceedings for the protection of sexual minorities’ rights as the new government is still weak and courts and the justice system are ineffective also for investigations and prosecutions.

Because of the criminalisation of same-sex relationships, LGBTI people can’t go to the Police to ask protection from violence: if the police know that you suffered violence because you are homosexual, they also rape you. This has happened a number of times to gay men in prison and to a lesbian girl who ran away from Libya to ask asylum in France. Society is generally also hostile to LGBTI people in Libya.

Case in point; On 22 November 2012, 12 gay men were tortured by militias called Doroh; the pictures of the victims were then circulated on social media further embarrassing and frustrating them.

With the 2011 revolution and the deterioration of the security situation in Libya,homosexual people became bigger targets of violence by Doroh, who are known to  kidnap, torture and kill homosexual people.

For the Libyan society, to be gay means that you are against religion because homosexuality is considered taboo in Islam. Homosexuality not only a crime according to the law, but is also forbidden by society and judged as an immoral attitudinal. Any action that may make clear that you are gay, can expose you to verbal violence as well as physical violence. LGBTI people in Libya have therefore opted to act   straight; no homosexual speaks openly about his/her sexual orientation, and this makes statistical data on LGBTI issues complicated or hard to get.

It is upon this background that QUZAH, a group of Libyan LGBTI activists, was founded in January 2014. QUZAH reports about the Libyan LGBTI community; it is also a member of ILGA Africa, and also collaborates with the international LGBTI movement. It is mainly working to create a big safe group and an LGBTI underground movement in Libya.

October 2014: QUZAH was contacted by Noor, a MtF (Male to Female) transexual person. Noor sent  QUZAH an email with pictures of tortures suffered under Libyan militias in July 2013. They hit the soles of her feet with metal pipes. They tried to catch her again in April 2014, but she managed to escape by car; however, because of the excessive speed, she collided with another car in the attempt to escape.

In 2014 Noor tried to migrate from Libya to United States through the United Nations Office, but she was not able to leave because of the armed gangs’ attack that vandalise Tripoli’s airport and because of the serious security and safety situation; furthermore, her physical appearance does not fit with the official passport.

In October 2015, she managed to leave Libya for Cairo (Egypt), where she got in touch with the UN Office and sought asylum. She is still waiting to leave Egypt to USA as a refugee.

1 May 2015: three men accused of being homosexual are reported to have been executed by Islamic State (IS) in Derna (Libya). They were shot in the head at the town’s main Ateeq Mosque following afternoon (asr) prayers. They were reportedly seized some months before. The three men were identified as Naseeb Al-Jazwi, Faraj Al-Shewi and Saad Al-Fahakhri.

Following the creation of a Sharia Court in Derna last year, IS has imposed rigid Sharia law in the town. There have been public beheadings, people have been lashed for drinking alcohol, and a fortnight ago, a man accused of stealing gold had his hand cut off. Its rigid interpretation of Islam in the town has also included a ban on smoking and strict gender segregation similar to that imposed in Afghanistan during the Taliban era. However, many see in its imposition of such action, a reign of terror designed to maintain its rule in the town.

They were arrested under Article 230 of the Tunisian Penal Code, which criminalizes gay sex. But the court now charged them with cannabis abuse and they are being held on charges of dealing in Tunisia and we are following them with Tunisian associations.