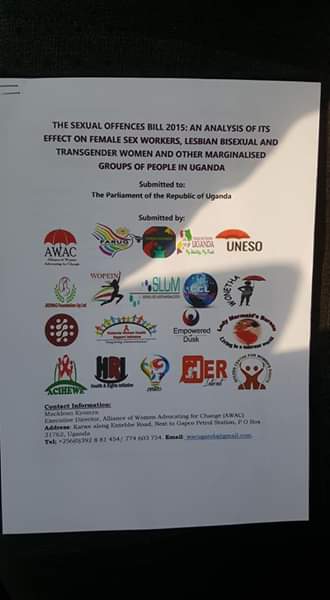 Sexual violence remains one of the most permissible and widespread crimes against women in Uganda. Police crime reports from as far back as 2011 continue to indicate a growing increase of cases of sexual violence against women and girls in Uganda. According to the Uganda Bureau of Statistics under the Uganda Demographic and Health Survey 2016, the proportion of ever-partnered women aged 15-49 years had experienced intimate partner physical and/or sexual violence at least once in their lifetime.1

This figure is considerably higher for sex workers, lesbians, bisexual and trans women (herein referred to as LBT persons) whose violence is fueled by deep homophobic sentiments, negative perceptions about sex work as well as religious and cultural backings of society. While there are a number of provisions in different laws such as the Penal Code Act that prohibit assault, indecent assault, defilement, rape, attempted rape, etc. the more marginalized and at risk groups in society; adolescent girls and young women, sex workers and LBT persons, continue to be at risk for sex related offences. Furthermore, violence targeting sexual and gender minorities like sex workers and LBT persons is hardly reported in the national statistics due to a number of factors.  These sexual offences against marginalized populations have ripple effects for individuals' health, well-being, and human rights.

Women are not a homogeneous group, there are a number of factors that are additionally faced by some women including age, sexual orientation and expression, gender identity, disability, social class, geographical location and many more. For all these factors, it is crucial to deeply understand the specific sexual violence risks and needs of a diversity of women belonging to marginalized groups. Studies show that specific groups of women due to their specific situation are likely to be at a higher risk of gendered violence, their

issues are hardly part of the mainstream women‟s rights movements and organizing on GBV or surfaced within legal and policy making processes and may often face barriers in accessing justice, medical care and other services.

Government of Uganda (GoU) has recognized Gender Based Violence (in all its forms including Sexual Violence) as a public health, human rights and economic issue. In response, Government of Uganda revised its family law in 2000 and its criminal law and Constitution in 2005 to protect and guarantee the rights of women and children and to promote gender equality and equity. Further Uganda has enacted the National Gender Policy in 2007 and the National Gender Policy and National Action Plan on the Elimination of Gender Based Violence in 2016. In addition, there are a number of enabling laws, policies and guidelines towards addressing GBV that include: Employment Sexual Harassment Regulation (2012), Clinical Guidelines for Management of SGBV Survivors (2012), Uganda National Action Plan - Protecting Survivors of Domestic Violence (2011), Land Act (2010), National Strategy to End Child Marriage and Teenage Pregnancy (2005 - 2020), Male Involvement Strategy (2014) and The Domestic Violence Act, The Uganda Gender Policy 2016.  The above normative frameworks have provided actors with an opportunity for strengthening the multi-sectoral approach to GBV programming in Uganda. However, despite the existence of the extensive policy framework, there is a disconnect remains between policy and practice. And most importantly, the fact that an enabling right-based Sexual Offences law has not been enacted leaves a number of gaps in addressing sexual violence as well as protecting the rights of sexual and gender minorities.

The Sexual Offences Bill (herein referred to as The Bill) should therefore seek to fill in the gaps missing in the existing laws thereby making the legal framework more adequate and relevant.  However, while this Bill is a much needed effort in combating sexual violence, care should be taken not to further marginalize select groups of people by criminalizing their livelihood, their humanity as well as re-criminalizing of the offences whose relevance has been overtaken by the rapid developments in the human rights field and evidence of their unenforceability.[6]

This paper is an analysis of The Bill as it stands, looking at specific provisions that further marginalize adolescent girls, young women, sex workers and LBT persons. It will also take into account the challenges that might be ensued while enacting the law.

The Sexual Offences Bill of 11th December 2015 was tabled in Parliament on 14th April 2016 as a Private Member‟s Bill by Monicah Amoding the then National Female Youth MP, and now MP Kumi Municipality under the umbrella of the Uganda Women‟s Parliamentary Association (UWOPA).

The Object of the Sexual Offences Bill is to consolidate and amend the law related to sexual offences from various enactments, and to provide for procedural and evidential requirements during the trial of sexual offences; To establish the Sexual Offenders Data Bank; To repeal provisions under Part XIV of the Penal Code Act and for other related matters.

The Bill contains a number of progressive amendments to the law on sexual offences and introduces within certain provisions much needed efforts towards combating sexual violence. The following provisions are welcome developments that if enacted into law protect the rights of female sex workers, adolescent girls, LBT women and other marginalized groups of people:

Negative and Retrogressive Provisions of the Sexual Offences Bill  Nevertheless, there are a few worrying provisions as far as sex workers, LBT women, LGBTI persons, and other sexual and gender minority persons are concerned. These are provisions that seek to further criminalize consensual same sex relations, sex work and lead to further violations of their rights. These are discussed below:

part of the body of another person.‟ This definition is broad and rather subjective giving room to several misinterpretations and attendant violations of rights. LBT persons who have been habitually victimized because of the institutionalized homophobia in Uganda are likely to be the biggest victims of this law where homosexual advances have been used to justify homophobic crimes.[7] In a report published by Sexual Minorities Uganda,[8] 264 verified cases of human rights abuses against LGBTI were documented between May 2014 and December 2015. This provision can therefore be used to aid in further perpetuating violence against at most at risk populations and groups of people particularly LBT persons and sex workers under the guise of direct or indirect contact. As such therefore, this definition has to be redefined to address the concerns tabled by female sex workers, LBT women, adolescent girls and other marginalized groups.

As has been normalized in our society, the expectation is that during marriage, spouses have given unlimited consent to their partners. However, the Bill seeks to remedy this by giving a legal backing to those whose sexual violence is perpetuated by their partners. As it stands now, there are contradictions within the law that still point to prejudices and bias. While rape is punishable by life imprisonment, a person convicted of marital rape is only liable to up to one year‟s imprisonment. The purpose of the law, and consequences to breaking the law should be to deter persons from engaging in such crimes. The inconsistencies in differentiating sentences for convictions of rape and marital rape are discriminatory as it does not provide victims of rape who are married to their perpetrators with equal protection of the law.[11] Already vulnerable groups of people, particularly young women and adolescent girls, sex workers are at risk of suffering marital rape. The law therefore ought to protect all victims with equal measure, which the current provision of the Bill doesn't do.