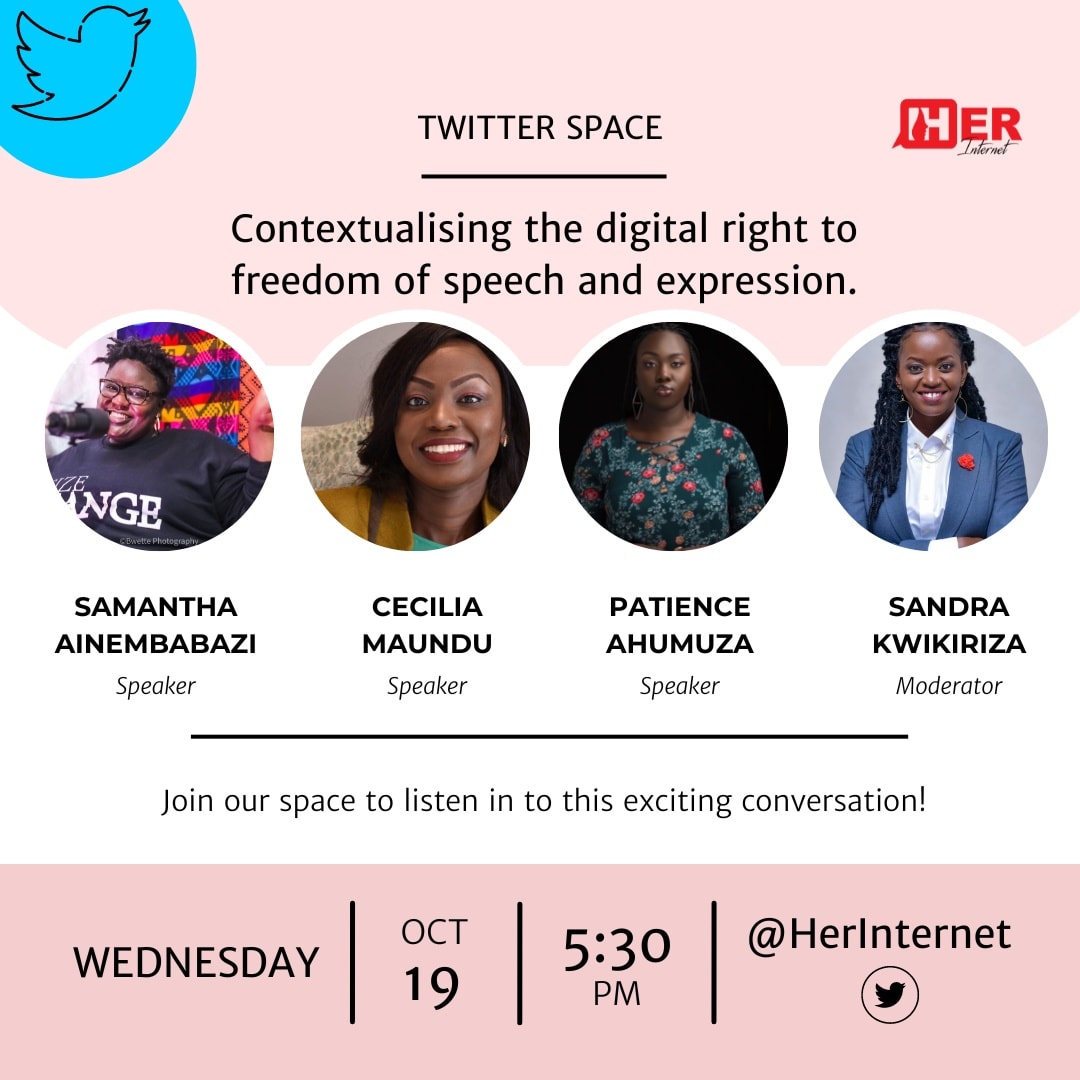 This October, HER Internet has launched a Digital Rights Advocacy campaign via their social media platforms, with funding from Internews. The campaign running with the hashtags #SpeakFreelyTypeFreely and #SeeSomethingSaySomething, will go on for 11weeks targeting womxn, particularly LBQ womxn and female sex workers. The goal of the campaign is to build awareness on their digital right to freedom of speech and expression, and to empower them to take charge of their digital body and online activity while creating safe spaces for expression for all online.

The Founder and Executive Director at HER Internet, Sandra Kwikiriza, says that enjoyment of our digital rights especially freedom of speech and expression will not happen in a vacuum. “We have to actively pushback against any infringement on this inherent right by all means available to us. This includes using the internet and social networking platforms to amplify advocacy efforts and organizing,” Ms. Kwikiriza emphasizes.

To further awareness and conversation around the campaign, HER Internet hosted a Twitter Space on 19 October, 2022 titled “Contextualizing the digital right to freedom of speech and expression”.
“This Twitter Space has been organized to position the campaign within the political and legal landscape for our key audiences and how this could apply to their daily use of the internet: their freedoms and potential infringements and violations, as well as the importance of speaking out against this,” said MsKwikiriza.
The well-attended Twitter Space yielded great discussion from the speakers who tackled important topics including the opportunities and shortfalls of digital freedom of speech and expression, how structurally silenced womxn can begin to build community and safe spaces online, how to navigate the legal pitfalls of double-edged policies and laws and opportunities for holding different players accountable from big tech to policy and lawmakers and enforcers, and at individual level.

Samantha Ainembabazi, the editor at Kuchu Times Media Group, emphasized the role that the internet plays in amplifying the voices of structurally marginalized womxn that are often sidelined by mainstream media. However, she also cautioned listeners on the two-edged nature of the internet where womxn are often forced to self-censor to avoid being hyper-visible and susceptible to backlash which is oftentimes damaging.
“For someone to say my life is in danger digitally, there’s levels to it. You could not be abducted, but there are certain things that happen to you online that affect you gravely in the flesh – like your mental health, your esteem, or even the people you could have helped,” said Ms. Ainembabazi of womxn who are more engaged online.
Ms. Cecilia Maundu, a digital security trainer and broadcast journalist in Kenya also shared how an unsafe internet for all worsens inequalities for marginalized groups through self-censorship.
“Unfortunately, when this happens, we find that it is only certain groups that can reap what we call the digital dividends. If we keep on going the way we are going, we are going to lose so may voices over the next generation,” added Ms. Maundu.

Ms. Maundu and Ms. Ainembabazi also offered some solutions to the issues that were raised, ranging from working with marginalized womxn and groups to build communities of support and allyship that will collectively advocate for favorable digital laws and policies, and also combat online violence; and undertaking sensitization drives to educate digital users on the different policies and how these could protect them or put them at risk for collective and individual action and accountability.
“We act like people come from Mars and spread hate. It’s us that are doing these things online. Before we start complaining about people hating towards us, we should probably look around and see how we’re treating other groups of people, people whose opinions differ from ours,” concluded Ms. Ainembabazi in a call for all internet users to do their part.

HER Internet’s campaign’s hashtag #SpeakFreelyTypeFreelydraws on the insight that the same rights that are enjoyed by people offline to express themselves should also be enjoyed online and calls on everyone to make it safe for people to express themselves freely, while #SeeSomethingSaySomethingencourages all internet users to call out any violation or infringement upon their digital rights or the rights of others.
To get involved or participate, follow HER Internetvia their social media pages: Twitter, Instagram and Facebookthrough #SpeakFreelyTypeFreely and #SeeSomethingSaySomething.