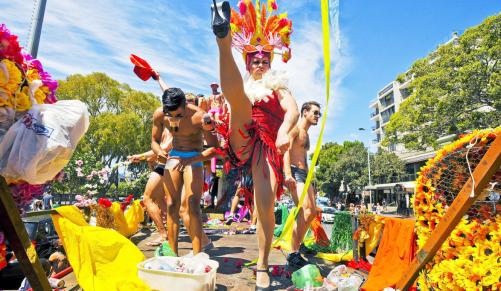 Cape Town – A lesbian and gay rights campaign organisation has hit out at the Cape Town Pride, saying the celebration does not represent the black homosexual community and it will not be supported.

“Free Gender has made the decision to continue to suspend its support for the upcoming Cape Town Pride 2015,” said Funeka Soldaat, who is the chairperson of Free Gender, an organisation that campaigns for the rights of homosexuals in Khayelitsha.

“The events currently tabled for the upcoming Cape Town Pride are exclusionary and do not represent the black lesbian, gay, bisexual, intersex and transgender community (LGBTI),” she added.

Cape Town Pride week starts on Friday and will take place from February 20 to 28, culminating in a pride parade and mardi gras along Cobern, Liddle and Napier streets in De Waterkant.

“Free Gender, with other persons in their personal capacities, have attempted to negotiate with the current planners of Cape Town Pride for the creation of an inclusive space which recognises and speaks to the struggles of all LGBTI persons in South Africa. However, the current organisers have responded with blatant racism and bigotry,” she said.

Last year, the organisation had also pulled its support for the event “because of the exclusion of the black LGBTI community” in decision-making and organising of the events, Soldaat said.

A meeting did not take place, Funeka alleges, after the organisation’s agreement to avail themselves at the Cape Town Pride June 2014 annual general meeting, where a new committee would be elected,

“No explanation was given by the Cape Town Pride committee. Free Gender made follow-up efforts with the committee by inviting a facilitator to assist with the process.

“There was no Cape Town Pride board and it was made clear a few individuals were in control of the organising.”

She said the work of this facilitator was undermined by white men who believed only they were capable of leading the Cape Town Pride process.

“This year’s programme was finalised by these individuals, who made it clear to Free Gender that there was nothing wrong with their racism and that they endorsed a segregated Pride,” Funeka said.

Soldaat called on all LGBTI individuals to remember the constitutional imperatives of South Africa based on the values of equality, dignity and celebration of diversity.

She added for Cape Town Pride to hold events in the name of celebrating the freedoms acquired through the personal and political sacrifices of LGBTI fighters was “appalling” and should not be supported.

“It is time that the Cape Town Pride organisers are made aware that black lives matter.”

“The Cape Town Pride Festival committee believes that all LGBTI lives matter. Our approach to the festival has been to include all interested parties, which includes Free Gender.

During August, October and December 2014, we put out a call for participation on our social media platforms asking all interested parties to get involved with our existing and new events.

In response, six people attended the advertised meeting during which we elected the 2015 committee. A representative of Free Gender attended. Two of the people attending were white.

The representative of Free Gender did not make herself available as a candidate.

The events for the 2015 festival were presented to all the members and interested parties attending our meetings. During this process the representative from Free Gender mentioned that she couldn’t relate to all the events that were presented.

We understand this, as we realise not all people will be able to relate to all the events.

We haven’t received any suggestions or a plan of action.

Cape Town Pride does not see race or gender, but people willing to put in the effort and time, for free, to create gay spaces to celebrate being gay. We are Capetonians and gay. That is all we are.”