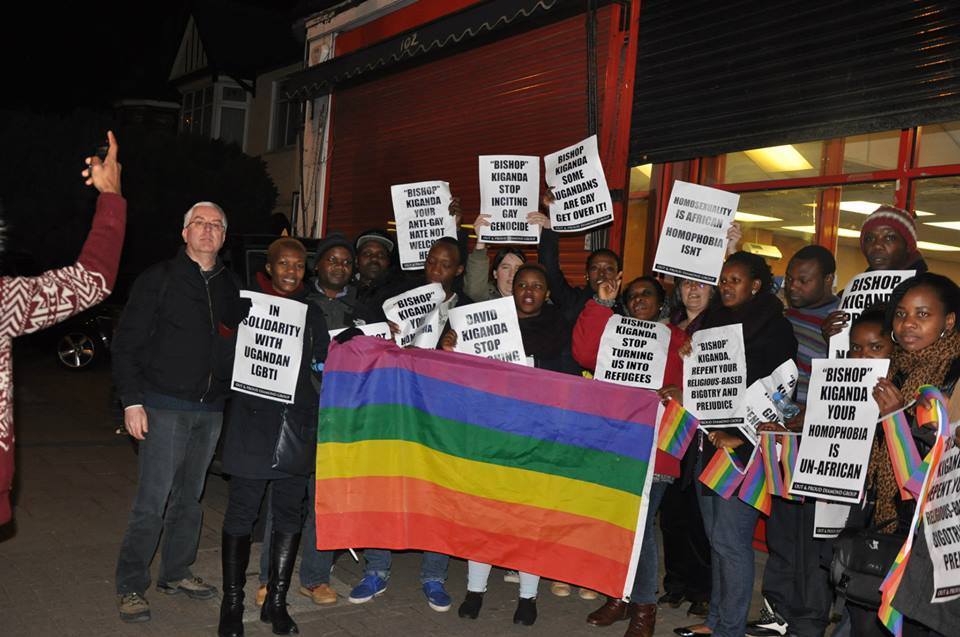 Homophobic Pastor David Kiganda Condemned by Gay Rights Activists in UK
By Editor:
Anti-gay activist Pastor David Livingstone Kiganda received a welcome he never would have imagined humanly possible while on a trip to London. The senior pastor of the Kisenyi based Christian Focus Center Church was attending a service at Great Commission Church premised at 102 Longbridge road in Barking London when gay rights activists stormed the premises chanting and demanding that the pastor leave the UK immediately.
As the protestors continued to chant at the top of their voices, the church goers were thrown into confusion and police had to come in to restore calm. However, an on ground witness intimated that the protest was peaceful and the aim was to beseech Pator Kiganda to stop his hate speech towards the LGBTI community in Uganda.
The protest was organized by African LGBTI group, Out and Proud Diamond Group and Paul penny, the founder of Rainbow International LGBT Activist Solidarity Fund.
Pastor Kiganda was very vocal during the debate on the ‘Kill The Gays’ bill and frequently urged Parliament to have no lenience towards homosexuals. Kiganda, a leader in the anti-gay movement in Uganda is remembered for organizing a heroic welcome for Parliamentary Speaker Rebecca Kadaga on her return from Canada where she accused the Canadian Minister John Baird of harbouring a colonial attitude towards African nations and interfering in Uganda’s internal affairs, in his address (Baird’s) that denounced Uganda for violating gay rights and opposing homosexuals.