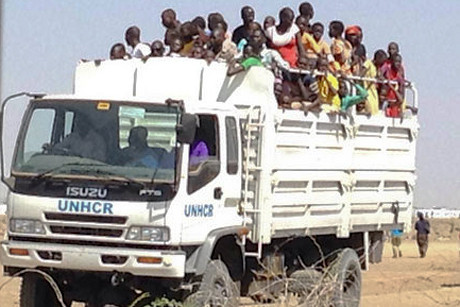 Following the increased number of Ugandan LGBTI refugees in Kenya and the indiscipline they have portrayed, the UN has set March as the last month they will avail monthly dividends.

In the months of January and February 2015, the UN noted an immense increase in the number of Uganda LGBTI refuges seeking resettlement to third countries. Unfortunately, it has been discovered that several of these cross over into Uganda and only return to Kenya in time to claim their monthly dividends. Many have also provided fake physical addresses in the urban areas and officials assigned to the refugees’ cases have failed to locate the said.

The relationship between the refugees and the UN has presently been marred by lack of trust brought on by such fraud cases. In light of this, the UNHCR and officials from different agencies handling refugee cases have now made it clear that the good days are over and all Ugandan LGBTI refugees should realize that resettlement is not a human right but a privilege.

On top of the fraud that has consistently characterized this case, Ugandan LGBTI refugees have shown a high level of indiscipline. Two days after being briefed on the proper resettlement procedure, which normally takes between one and three years, they put up a protest in front of the Nairobi office of the UN High Commissioner for Refugees; something that greatly proved the lack of respect for the system.

With the argument that their lives are in danger, the media and social media rants by these refugees have only served to prove that they are also not doing anything to protect their identities and continue to put themselves in easy lines of target.

Many have also left the Kakuma refugee camp, yet the UN does not have any mandate beyond the camp, rendering availability of both protection and services impossible. UNHCR has noted that having already gone over and beyond for the LGBTI refugees, the rest of the refugee community was angered by this special handling to this group that continues to abuse the exceptional treatment accorded to them.

The refugees have now been advised to return the camp and follow the proper procedure that comes along with the resettlement process as well as understand that the third countries consider many factors like education and capacity when dealing with this process. In fact statistics indicate that one out of one hundred people are usually resettled in such circumstances and being that LGBTI refugees are not a special case, priority may not be given to their cases. They also noted that being LGBTI is not a guarantee for resettlement.

As activists in Uganda, we hope that this issue is sorted out very soon so that the genuine cases are not jeopardized by the fraudulent cases and wish everyone safety and patience in this trying moment.

Below is the full statement issued by UNHCR in regards to the status of the Ugandan LGBTI refugees in Kenya.

After the passage of the anti-homosexuality Act in Uganda in 2014, a number of LGBTI asylum started approaching the UNHCR offices in Nairobi and Kakuma.

In view of the relative small numbers received during 2014, UNHCR was in a position to prioritize the caseload at all levels of the process as well as to provide them with financial and social assistance. However, while keeping in mind the potential protection needs of this particular population in Kenya, UNHCR and its implementing partners may have created a pull factor for young Ugandans to travel to Kenya, attracted by automatic assistance and relatively quick resettlement processing.

In view of the consistently increasing numbers of new arrivals since the end of 2014 and in order to ensure that only asylum seekers with genuine LGBTI claims benefit from international protection, it is considered to be of utmost importance that UNHCR maintains the integrity of its programmes, including registration, Refugee Status Determination, Assistance and possible solutions.

 The registration process for all asylum seekers in Kenya starts in the Department of Refugee Affairs (DRA), where they will be issued with an asylum seeker pass. After registration with DRA, asylum seekers have the option to approach the UNHCR office. In view of the huge number of asylum seekers from different countries and profiles (including children, women at risk, disabled, sick and elderly persons), new LGBTI asylum seekers will not be immediately registered but be provided with an appointment slip for registration. Their fingerprints will be taken and a quick assessment will be conducted by UNHCR staff.

 The Refugee Status Determination (RSD) process (which aims to establish if an applicant meets the refugee definition) takes time and may require several complementary interviews. From 1st July 2014 onwards all decisions need to be authorised by the governmental Technical Advisory Committee (TAC) and signed off by the Commissioner for Refugee Affairs. In case the TAC and Commissioner endorse the decision of recognition, the applicant will be issued with a Notification of Recognition.

 If and when individuals are granted refugee status and once their Notification of Recognition has been issued, their cases may be referred for resettlement processing.

 Resettlement processing again requires a specific resettlement interview with UNHCR staff before the case can be cleared and officially submitted to a resettlement country. The number of resettlement places is limited, while the final decision to accept or deny 2 a case for resettlement remains exclusively with the respective countries, based on their specific legislation and admissibility guidelines. Assistance in the urban areas

It should be clear that UNHCR does not normally provide assistance to asylum seekers and refugees in the urban areas. Only a small number of extremely vulnerable refugees can benefit from temporary financial assistance (1 to 3 months), while implementing partners will work with them on an exit strategy. UNHCR does not have the resources to support all LGBTI asylum seekers with continuous assistance during the time they have to remain in Kenya. During the time of processing, individuals can be referred to the implementing partner HIAS for a needs assessment and be provided with initial basic assistance for food and shelter. Asylum seekers and refugees with serious medical problems can be assisted through one of UNHCR’s medical partners or public health facilities. Asylum seekers should be made aware of the fact that funds for assistance in the urban areas are extremely limited and need to be equally and fairly distributed among all vulnerable cases. During the initial period, the asylum seekers should identify ways for self-sustenance in the urban areas, in close consultation with HIAS social workers.

 Security:
From March to August 2014, the security situation of all asylum seekers and refugees in the urban areas deteriorated significantly after a directive was issued by the Kenyan government ordering all refugees to relocate to refugee camps. During the Usalama Watch operation numerous reports of widespread arrests, detention, deportations to Somalia, human rights violations, harassment and extortion were received. Many refugees and asylum seekers fell victim to arbitrary arrest and detention while being charged with unlawful presence. Although there is currently no widespread security operation affecting refugees and asylum seekers in the urban areas, the protection context for the urban population remains precarious and unpredictable. A Restrictive Security Laws (Amendment) Bill was signed by the President at the end of 2014. While on 23 February 2015 the Kenyan High Court nullified the provision with regards to a possible ceiling of 150,000 refugees in Kenya, it maintained the clause regarding the encampment policy of the government. Whilst living in Nairobi asylum seekers may be exposed to arrest, detention, subsequent abuse and even deportation. It should be made clear to new asylum seekers that the access of UNHCR and legal partners to detention facilities, police stations and airport is extremely limited.

 Personal Conduct:
Regrettably, it is essential for LGBTI persons in Kenya, to act in an inconspicuous and discreet manner for their own security. Homosexual acts are illegal under Kenyan law and Kenyan society is generally not accepting of homosexuality. Harassment of suspected homosexuals by Kenyan 3 authorities is reported to occur regularly. In general Kenyan society’s treatment of and attitude toward homosexuals is often characterised by discrimination and stigmatisation. Due to the precarious security situation of asylum seekers and refugees in the urban areas, the huge workload of UNHCR in both Nairobi and Kakuma, as well as long processing time with some of the resettlement countries, it may be expected that a large number of LGBTI individuals may need to remain in Kenya for an extended period of time. It is therefore of utmost importance that applicants keep a low profile and cooperate with UNHCR and partners as much as possible. During the last months numbers of Ugandan asylum seekers and refugees have camped in front of the UNHCR office in protest against the slow processing as well as the lack of automatic assistance. In some instances they have displayed violent behaviour. This will unfortunately not result in any acceleration of the overall procedures and only causes more delays, while the individuals are exposing themselves to more visibility, protection problems and the risk of police arrest and detention.

 Fraud
Asylum seekers may have received advice to embellish or exaggerate their claims, however this is a form of fraud which can adversely impact the efficiency and success of RSD and resettlement processes, potentially resulting in rejection or cancellation of refugee status and/or penalties including delayed resettlement processing or closure of resettlement files. During interviews with UNHCR, clients should ensure that they give 100% true statements.

• UNHCR has been informed that unscrupulous brokers are exploiting refugees and asylum seekers in Kampala and Nairobi. These individuals falsely claim that they can provide services related to documentation and resettlement in return for large amounts of money. In some instances these brokers impersonate UNHCR or partners staff.
• You should not pay any money to any person or organization at any stage of the registration, Refugee Status Determination (RSD) or resettlement process. All services provided by UNHCR, DRA, Immigration Services, IOM and other non-governmental organizations working with refugees in the urban areas and the camps are FREE OF CHARGE.
• Please notify UNHCR of any attempt to charge you for any service related to assistance, documentation, RSD or resettlement related processing or if you would have information about fraudulent exploitation schemes operating in your area:

Working groups have been established in both Kakuma and Nairobi to coordinate efforts to address the specific needs of these individuals. Asylum seekers or refugees who face protection problems in the urban areas can approach the Protection counselling desk on Thursday morning. In case of an urgent problem the UNHCR Radio Room can be contacted on 020 4232000. Specific inquiries can be sent to kenna@unhcr.org.