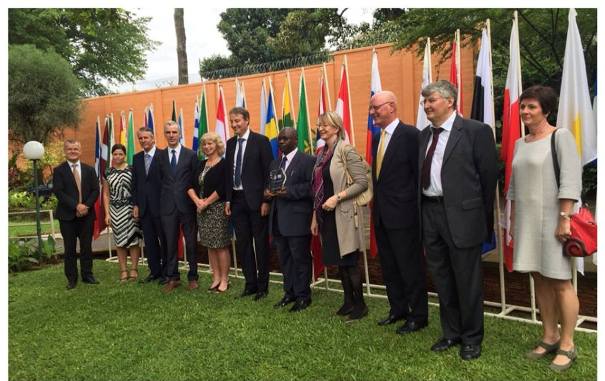 The award ceremony held at the Belgian ambassador’s residence was attended by dignitaries and representatives from several human rights organisations.

Dr. Sewanyana is the founder of the Foundations for Human Rights Initiative (FHRI) and was recognised for his promotion & protection of democratic rights, good governance, civil and political rights , women’s rights, access to justice and the rule of law.

FHRI has also been very out spoken on issues of sexual minorities and prisoners’ rights, and is currently engaged in the campaign for free and fair elections in Uganda in 2016. “The respective provisions in the NGO Amendment Bill will need to be revisited in view of three models of legislations, including state regulation, hybrid model and self-regulation,” Dr Sewanyana said in his acceptance speech.

The award was handed over by the Belgian ambassador to Uganda Mr Alain Hanssen.