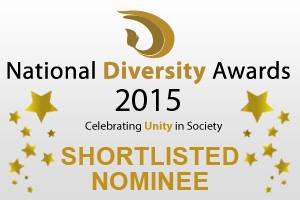 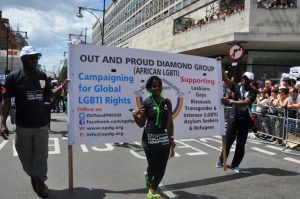 Out and Proud Diamond Group (OPDG), a United Kindgom based LGBTI organization   founded by Ugandans who had to flee their homeland due to their sexual orientation and gender identity has been nominated for one of UK’s most prestigious award.

Shortlisted in this year’s National diversity Award under the Community Organisations on LGBTI issues, OPDG is vying for this award alongside seven other organisations

Abbey Kiwanuka, co- founder and Executive Director  of OPDG said they were delighted to be shortlisted in the National diversity awards 2015 and the nomination meant a lot to the organization and their struggle for justice and equality for LGBTI people in countries where we are coming from.

“This nomination means a lot to all of us and above all, we would like to dedicate this recognition to all those unsung LGBTI rights activists who are struggling to bring equality and justice.  We would like to thank all our partners in the struggle and also send out a message of hope to all those LGBTI people still facing discrimination, persecution, injustices among others that change is coming,” Kiwanuka said on the getting news of being shortlisted.

OUT AND PROUD DIAMOND GROUP is a Lesbian, Gay, Bisexual, Transgender and Intersex organisation, Group that sprang from the ashes into international limelight. Previously operating in obscurity under the umbrella of other organisations, it now operates in co-ordination with partners with which it operates on equal terms. Previously with a handful of members from Uganda, the organisation currently boasts about, a hundred plus members, representing a wide cross-section of African countries including Gabon, Gambia, Sierra Leone, Nigeria, Cameroon, Tanzania, Rwanda, Burundi , Uganda and Jamaica.

Its core mission is to create an environment in which the freedom, rights and equality of Lesbian, Gay, Bisexual, and Transgender and intersex people are guaranteed and there is no discrimination based on sexuality and gender identity.

The National Diversity Awards celebrate the excellent achievements of grass- root communities that tackle the issues in today’s society, giving them recognition for their dedication and hard work.

Charities and Role Models from across the UK will gather at the breathtaking Anglican Cathedral on 18 September 2015 for Awards ceremony. The Best of British diversity will flock to Liverpool to celebrate the outstanding achievements of those who have demonstrated their devotion to enhancing equality, diversity and inclusion in today’s society.

National Diversity Awards  is supported by Microsoft will and a number of other major groups like Barclays, The Army, Financial Ombudsman Service, Liverpool City Council, Penna, Mouchel, MI5, PwC, ThoughtWorks, Transport for London and The Open University.

Over 20,000 nominations and votes were received this year, paying tribute to grass root community organisations nationwide.

The African Lesbians, gays, bisexual, transgender and intersex organization Out and Proud Diamond Group (OPDG) was among the lucky ones to be nominated. OPDG was formed in 2011 by prominent LGBTI activists from Africa based in the United Kingdom. The founders themselves fled their home countries due to the persecution and discrimination because of their sexual orientation.