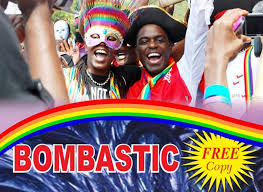 The fight for the recognition of LGBTI rights in Uganda continues to gain momentum despite the several setbacks faced by the movement. To deal with the problem of constant outings and negative coverage by the main stream media in not only Uganda but also Africa as a whole, Kuchu Times was set up to provide a plat from for sexual minorities to tell their stories and share their experiences without the bias they have so often been subjected to.

Being an online platform, Kuchu Times is not readily accessible to the grass root people and those with internet connectivity issues. It is this realization that gave birth to the idea of Bombastic Magazine.

On the 22ndof December 2014, the magazine containing experiences of LGBTI persons was launched and distributed with an aim of undoing the myths and lies that for a long period of time have been labeled against the LGBT community.

Bombastic was a ground breaking publication in Uganda and the world that we would like to carry forward. The International Gay and Lesbian Human Rights Commission has now launched a campaign to help raise funds for the publication of the second issue of Bombastic Magazine.

We join them in beseeching you to give generously to this cause that has created such a positive change in the society’s attitude towards LGBTI persons.

The Anti-Homosexuality Act of 2014 sparked unprecedented levels of intolerance, aggression, and persecution for LGBT folks across Uganda. While the homophobic and transphobic legislation has since been repealed, another anti-gay bill is in the works, and many have lost their jobs, been kicked out of their homes, or forced into hiding. As politicians, religious leaders, and media outlets continue to circulate LGBT intolerance for selfish gains, the lives of our Ugandan LGBT brothers and sisters have become increasingly precarious.

We need to do something

What’s the one tool that can effectively stop intolerance, calm public fears, and help build a more inclusive society?

Some would say it’s education. If society at-large can understand that being LGBT does not make a person anything less than human, they can open their hearts to loving and respecting diversity.

That’s close, but not exactly right.

Better able to build empathy rather than just educate. Nothing sways public opinion faster than storytelling.

Kasha Jacqueline, one of the founders of the Ugandan LGBT movement, understood how powerful individual stories can be. She knew that a misguided perception of diversity as a “sickness”, “western import” or “perversion” could not withstand the test of closeness. Those who open their eyes to see what their neighbors, friends, and family members have experienced cannot justify discrimination (no matter what their religious leaders or politicians may say).

Kasha collected dozens of stories and printed the first edition of “Bombastic Magazine” in record time. She cut costs every way she could, editing the text herself and brokering deals with printers who took the risk of being prosecuted. Her team distributed the free magazine across Uganda, leaving it on doorsteps, car windshields, and other locations where its message would be heard. The results were beyond their wildest expectations.

Phone calls came in from across the country. Some had never known other people nearby were going through the same struggles.  Others opened their eyes to the reality that their own family members could be transgender. Some simply thanked her for helping them expand their awareness.

They printed about 20,000 copies and ran out faster than expected. Even police officers requested copies, as well as the Minister of Health and other high-ranking politicians. The magazine was prominently discussed in the Ugandan media.

Kasha saw something she could only sense before. Behind the bigotry, intolerance, and persecution – her movement had more allies than she knew.

Your help is key

More stories are pouring in, and more people are clamoring for a second edition. Kasha wants to print 30,000 copies and distribute them nationally. She wants to invest in a professional editor, and more formal operations for distribution.

Printing costs $10 per issue, a higher price than usual (charged by the printer who is taking legal risks to be involved in the project). This is her only choice, as printing outside of the country would lead to immediate confiscation upon crossing the border. She needs $5,000 to complete the funding and get started.

We are counting on your support to print and finance the second edition of Bombastic Magazine.

As a donation to Kasha’s fiscal sponsor, The International Gay and Lesbian Human Rights Commission, your contribution is 100% tax deductible. All proceeds will be used to fund the magazine.

Thank you for your generosity.

The International Gay and Lesbian Human Rights Commission fights to protect and advance LGBTI peoples’ dignity and human rights as part of the global human rights movement. We empower people on the frontlines, hold leaders accountable and measure our impact through positive change in people’s lives.