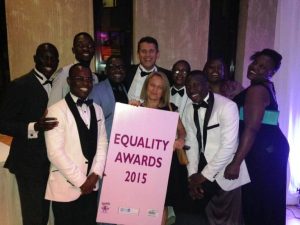 Last Friday (18th December 2015) saw Sexual Minorities Uganda (SMUG) celebrate a number of achievements which included ten years of its existence, the conclusion of the Sexual Health And Rights Programme (SHARP) as well as the first ever Equality Awards.

The top of the notch event was held at Protea Hotel and was graced by dignitaries from various missions in the country, academic scholars, donors and allies. The Guest of Honor, former Vice President HE Specioza Wandera Kazibwe was nothing short of inspiring for this community that has for so long been subjected to negativity and discrimination from  the political powers of this country.

She encouraged LGBTI community leaders to continue the struggle with their heads held high and take comfort in knowing they were bringing forth change, one person at a time. She also commended the work the community was doing towards creating a better and healthier environment for not only Men who sleep with men (MSM) but the whole community at large.

In her keynote address, the former Vice President pledged her commitment and dedication to help further the efforts of the activists in curbing HIV/AIDS and other sexually transmitted diseases within the LGBTI community.

Delivering his opening speech, SMUG’S Executive Director Dr Frank Mugisha called up the government to up its efforts in the fight against HIV/AIDS within minority groups. “Regardless of who we are, health is important and being able to freely access health services is a basic right. We appreciate the effort the government has taken to include LGBTI persons in its policies but a lot more still has to be done,” Dr Mugisha noted.

Also on the agenda was SMUG’s official accountability as they ended the three year SHARP project.  SMUG was tasked with the advocacy part of the project in which the total number of MSM who were accessing 2 or more related health services increased from a total of 317 to 2,558 in 2015.

The project having been hindered by the passing of the Anti Homosexuality Act in 2014 finally got back on its feet after the annulment. SMUG also acknowledged that through this project, they had managed to forge relationships with some of the key players in the health sector like Ministry o Health and various hospitals that are currently providing services to gender and sexual minorities.

SHARP was a three year that was based on  3 core objectives i) Increasing reach of MSM by Strengthening their networks and community-based organizations ii)Increasing access and uptake of better quality HIV services and iii)enhancing the social and structural context aimed at creating  an environment where MSM can access non-discriminatory health services .

The Project which was funded by the Danish International Agency(DANIDA) was effected in partnership with the International HIV/AIDS Alliance and Most at Risk Populations Initiative (MARPI).

The highlight of the evening was the handing over of the Equality Awards to honor different individuals for their roles in easing health access to LGBTI persons in Uganda.

Recipients of the 2015 Equality Awards

Equality Award for Outreach- Most At Risk Populations Initiative (MARPI)

Entertainment for the night was provided by renowned musicians Lillian Mbabazi, who managed to get the former VP on her feet and doing a paka chini move, Maurice Kirya and Irene Namubiru who had the whole congregation dancing to her tunes.

The community applauds SMUG for not only the well put together event but more importantly for their continued dedication and efforts towards bettering the lives of all sexual and gender minorities in the country.