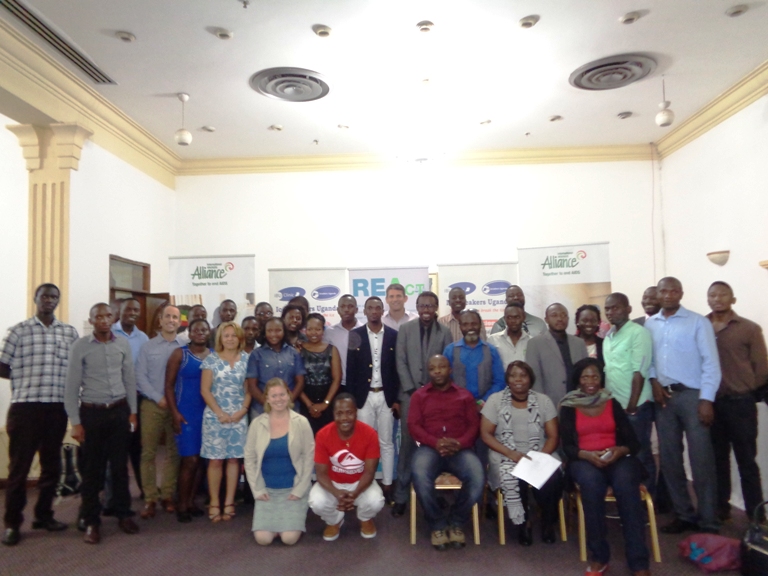 On the 16th of December 2015, Ice Breakers a Ugandan based LGBTI organization officially ended the Sexual Health And Rights Programme (SHARP) at Grand Imperial Hotel in Kampala. With support from the Danish International Agency(DANIDA),  Ice Breakers in collaboration with Community Health Alliance( CHAU), the Ugandan chapter of the International HIV/AIDS Alliance and Most At Risk Populations Initiative(MARPI) STI Unit Mulago  initiated the SHARP project  with the aim of building healthier environment for men who have sex with men (MSM) in the country.  SHARP was 3 year project that was initiated in 2013 and came to an end thus year (2015).
In Uganda, MSM have a higher risk of contracting HIV at 14-35% compared to 7% of the general population. It is extremely difficult for gay men or other MSM IN Uganda to access safe, non-discriminatory sexual health services because of deep rooted prejudice of the general public toward sexual minorities. This notion was further intensified by the signing of the Anti-Homosexuality Act in 2014 (that was later annulled) which made it harder for gay men to come out and seek health services.

Denis Wamala, the Programs Director of Ice Breakers Uganda while presenting the report said that they encountered many challenges one of which was the sigining of the Anti-Homosexuality Act in 2014 that greatly affected and halted the progress of the project.

Despite all these barriers, he declared with delight that the project registered great results that have impacted the lives of many MSM in Uganda. He also said that they had brought many stake holders on board helping the project to achieve its stated goals.  Wamala also applauded the great work done by MARPI Mulago in providing free and friendly health services to MSM and the entire sexual minorities’ community in Uganda.

“There is more to be done; and as much as policy makers demand data and proof of existence of these challenges to Ugandans, they should provide platforms, resources, so that community service organizations like Ice Breakers can deliver,” Mr. Wamala continued.

He concluded with the key action points for a better and healthy MSM community in Uganda which included a call for more demand creation, a need to strengthen referrals, make an improvement on retention and creating strong community health systems.

Bob Bwana, the Office administrator at Ice Breakers Uganda stressed the need for more support to develop and enlarge the current resource centre where MSM come to read the available literature about safer sex and acquiring more knowledge on HIV/AIDS preventive methods.

Brant Luswata Brant the Clinic and Resource Center Manager said the IBU clinic has helped SHARP to achieve its stated objective since it has registered a high number   of MSM and dother LGBTI community visiting since its inception.

“The IBU clinic being the first of its kind in Uganda as an only exclusive LGBTI clinic in Uganda has registered remarkable achievements.  Despite the challenges especially security concerns while conducting our outreaches, we devised means and this in no longer a threat to hinder our work. However, we still need to equip the clinic with enough screening equipment such that we can do most of these laboratory services by ourselves,” Luswata shared.

Luswata further explained that since its inception in 2013 up to its closure, the SHARP project had covered a total number of 3,328 MSM in Uganda with a total of 118,881 condoms and lubricants being distributed. 78% of these were provided with 2 or more HIV related services.

Marjorine Nakimuli a health worker from MARPI Mulago delivered the key note address on behalf of Dr. Kyambade who called on all stake holders to come on board and fight HIV/AIDS among MSM in Uganda. She further thanked IBU and its partners for the great work done in fighting Hepatitis B among MSM.

ThE project was built on 3 core objectives;

The project, throughout its operations in its 3 year time frame run national outreaches and created strategic drop in centres for MSMs to easily access health consumables at their convenience, putting in consideration the aspect of holistic care and wellbeing of gay men reached.

There was also great mobilization especially from the peer educators to widen the referral base where MSMs can access better and friendly health services. By the time the projected started in 2013, the total number of MSM who were accessing 2 or more related health services increased from a total of 317 to 2,558 in 2015.

The number of registered peer educators under this project increased from 132 in 2014 to 1327 in 2015, the project registered a total of 623 completed referrals for STIs, 21 MSMs enrolled for ART and 15 received treatment for other opportunistic infections, 648 MSM underwent treatment for STI screening and 459 of these received STI treatment, 1,459 MSM were given health talks and 102 MSM received IEC materials on HIV and SRHR. 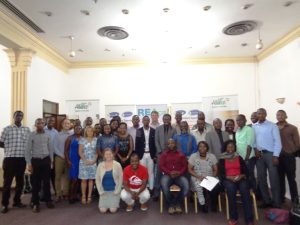 The following numbers of stake holders were reached by SHARP project from 2013 to 2015: