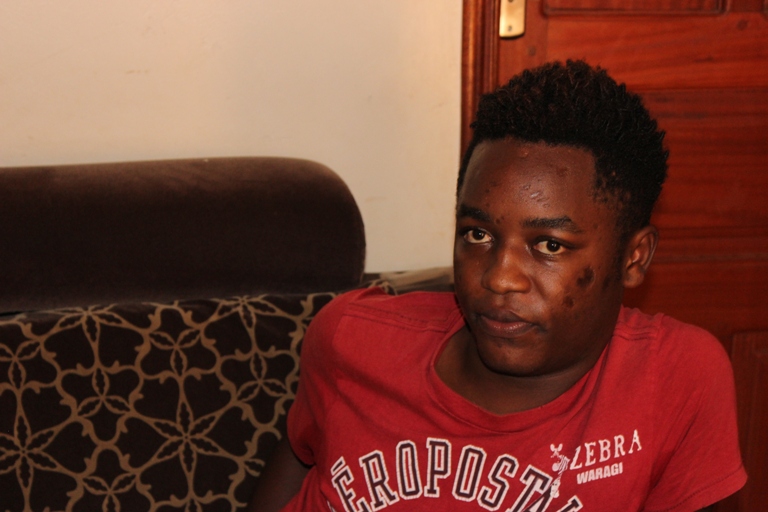 Masudi Herman commonly known as “Sherry” among her peers is a 21 year old trans sex worker who hails from Democratic Republic of Congo. Right from childhood, Sherry felt her feminine side take a domineering role though physically, her body told a different story.

Her parents always knew that their son preferred to behave like girl but hoped he would outgrow this characteristic once he came of age. At the age of 14, she could no longer hide her attraction to men and that was when all hell broke loose. Her father, a typical traditional African man asked her to leave his home as he could not put up with the shame of having bore a boy-girl.

This marked the beginning of another chapter in Sherry’s life. She left the only home she had ever known (Congo) and came to Kampala to live with her sister. Fortunately, she quickly found employment at a restaurant in Mengo where for the first time in her life, she fully explored her femininity; she wore dresses, painted her nails and plaited her hair.

With many needs to meet, the young Sherry also started engaging in sex work to bring in extra income. Not knowing the rues of engagement, Sherry rarely told her clients about her gender identity and this often times resulted into assault, rape or nonpayment. Sherry says all the scars on her body (the most visible ones being on her face) have been as a result of such attacks from clients.

Sherry vividly recalls her first arrest like it happened yesterday. While working in Mengo, she became friends with one of the girls that worked at the same restaurant. Unfortunately, after her confidant’s dismissal, the latter went straight to police to report how the restaurant owner was harbouring an LGBTI identifying person.  Before she knew it, police raided the restaurant in the company of a local media crew, Sherry was stripped naked to verify if she was male or female and taken to jail. That evening, she made news on a local programme known as ‘Agataliko Nfufu’ and her picture appeared in a daily newspaper. However, the released reports claimed that Sherry had been rounded up during a raid on commercial sex workers; an account she vehemently refutes.

After that incident, Sherry lost her job and embarked on full time sex work. She was older and wiser and says she now knows better than to hide her gender identity and orientation. This has however not stopped her from being attacked. Some clients, Sherry says, still agree to a night with her but end up being violent and threaten to drag her to police if she causes any trouble.

Sherry tells of another incident that left her in jail. One fine day while at a prominent sex workers’ hot spot, she met a man who expressed his interest and after coming down to an agreement, he started buying her liquor that left her intoxicated.  On reaching their rendezvous, the man turned on her and beat her before taking her to the New Taxi Park Police Post.

Sherry had blacked out at a certain point and on regaining consciousness; the police officers told her she was being charged with obtaining money from someone under false pretense. Scared, she begged for forgiveness from the officers on duty vowing never to do the same again and was, by some miracle, pardoned.

The amount of media attention Sherry’s arrests received were also a blessing in disguise. Transgender activists in the country, led by Beyonce, came together to help her out and that is the first time she realized there were people in the world like her. No longer did she feel like a freak of nature and quickly assimilated herself into the Ugandan LGBTI community.

Sherry says she wants to fully transition although that dream still seems a long way off due to financial constraints.  She also explains that life in Uganda is hard as she has had to move from one friend’s home to another just to keep a roof over her head. She plans to go to Nairobi to start processing the asylum process in the hope of bettering her life.