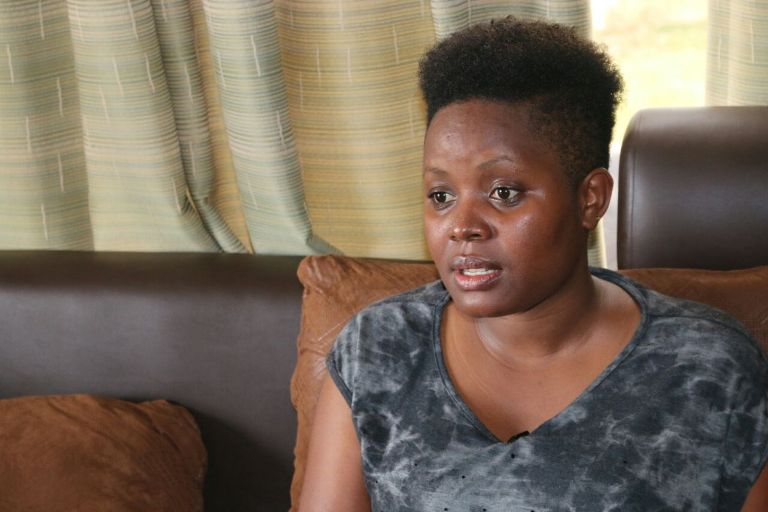 She joined TUK, a band made up of other youth creating music for change in February 2015. While she has had time to chase her dream, singing for live audiences was never an easy task especially when she first started out but 15 months later, Lynn confesses she is starting to get the hang of it.

Lynn previously worked within a governmental office until she was forced to go after her dream. For a sexually fluid person working within government, she found contentment and sought to build a growing career in a field where she had expertise. However, when one of her bosses found out about her sexual orientation after running into her one night as she went on with her social life, the working environment that she had come to enjoy suddenly shifted. Her female boss who had seen her out with her friends approached her thereafter and asked her why she had been so cozy with girls the previous evening; this moment marked the beginning of harassment for Lynn at her work place.

She narrates that before all this, she had taken a lot of percussion to ensure that her workmates would not get wind of her orientation. “There was a line drawn between my private and work lives, I tried to wear my hair as ordinarily and girly as possible. However after the incident with my boss, my work was greatly affected; I lost friends, had to learn how to deal with people refusing my help within office and also had to deal with demeaning questions like “are you gay for money?” I was labeled a sexual pariah which affected my mental well being and left me quite bitter.

However, in all this Lynn realized that homophobia cannot be overcome by simply sitting back and taking all the hate thrown at you.” As long as you stay in that space it will affect you. There is no overcoming it but you can choose to grow a thick skin and learn to still love yourself.”

This experience however hurtful pushed Lynn to quit and start her own IT company currently employing five people and  three hands on directors. With firsthand experience on what discrimination can do, Lynn looks to ensure that she starts with creating a nondiscriminatory environment for everyone within her work space; self acceptance and expression is encouraged as well as respect for each person’s views and opinions.

In quitting a well paying job that exposed her to hate because of her sexuality, Lynn stressed that she needs people who take the assumption that because you are gay, lesbian or otherwise, all you do engage in is sex and drinking binges.

However this is not the reality as most LGBTI identifying individuals are actually more hardworking than they are given credit for.

While the coming out process was never easy for Lynn, she shared the heartbreaking moment when her mother broke down and cried when she found out that Lynn was sexually queer from her eldest brother who is a pastor. Lynn was traumatized by the pain she saw in her mother’s eyes and at some point considered faking heterosexual relations just to calm her mother’s fears. However after a lot of self questioning and acceptance Lynn realized that living a lie to please her mother was no less a sin; she chose to live her truth and hold on to hope that with time, her family would see there was nothing wrong with her and her sexuality does not take away anything from her as a person.

Lynn explained that it took her best friend explaining to her mother that this was simply a phase that she would out grow for them to move on from the pain of knowing her sexuality. For persons coming out, Lynn that as one comes out to a friend and family, they should remind them that they too are coming out. It is therefore important that one is patient with their loved ones; take responsibility of the impact and where it goes.