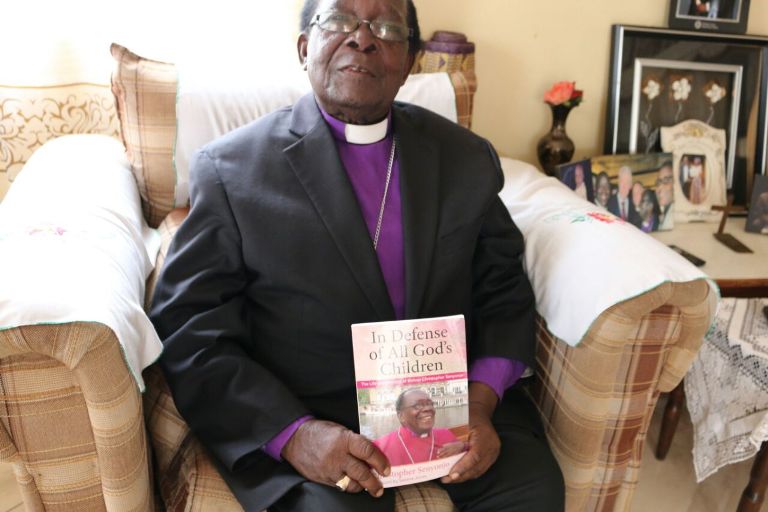 Bishop Christopher Senyonjo needs little or no introduction in the Ugandan sexual and gender minority community. He has ceased to be just an ally and for many, he is now a spiritual father and guardian. The Bishop who has dedicated his life to providing solace and counseling to LGBTQ persons has now written his memoirs in a book titled ‘In Defense of All God’s Children’.

In the 152 paged biography, the 85 year old Bishop takes us through his life thus far, from his formative years, his education, his choice to join the church and what influenced him even though he was unsure of himself, his works as the Bishop of West Buganda diocese, the martyrdom of the Archbishop Janan Luwum, his work with sexual and gender minorities and how this has affected his life.

He vividly teleports his readers to a time when instability reigned in Uganda and tyranny was nothing but ordinary. Most notable in this book is the church’s ill treatment of Bishop Ssenyonjo for choosing to preach a message of love and acceptance to sexual and gender minorities. Therein, he shares the various letters exchanged between himself and the top most clergy of the church he passionately served for over twenty years; communiqués that expose the extent to which he was alienated his own for choosing to speak for God’ s children.

According to Bishop Senyonjo, he choose to write his memoirs because he believes his purpose should be shared  by all and to fully do that, we must understand the entire journey. He explains that writing ‘In Defense of All God’s Children’  is a dream come true and hopes it will at least impact a few lives as well as change mindsets towards sexual and gender minorities.

The book is currently availed on Amazon for about 11 US dollars and will soon be available in all local bookstores for approximately 40,000 Uganda shillings.  Bishop Senyonjo’s is a journey that one must share in and what better way to do this than to partake in his memoirs.

Bishop Christopher Senyonjo was born to Maria Nosianta Terugwa and Erika Kapere on December 8th 1931. He had four siblings in total. Due to his hunger for knowledge, a family friend suggested that he enrolls at the local school and this marked the beginning of his academic journey.

He also lost his first wife to a snake bite, only seventeen days after they tied the knot

He joined Makerere University to purse a Bachelors in Medicine but sadly flanked out after the first year. Thereafter, he found a teaching job, one that paved the way for his teaching career and eventual pursuit of theology

The Bishop gave his life after the death of his first wife, he could only find solace in the word of God

In January 1974, he was ordained the third Bishop of West Buganda Diocese a position he held until retirement in 1998

He was one of the translators of the Bible into Luganda

Bishop Senyonjo was one of the clergy that escorted Archbishop Janan Luwum to the then International Conference Centre (current Serena Hotel) , an incident that led to the eventual killing of the Archbishop

He first encountered sexual and gender minorities in 2000 and from then on, he set out to preach the gospel of love and reconciliation as the spirit led him

The following year, the church and government accused him of promoting homosexuality; an incident that forced him to remain in the United State for six months

In 2002, the church banned the Bishop from participating in any church activities for presiding over functions and later accused him of abandoning the church of Uganda and starting his own affiliation

In 2010, he founded St Paul’s Reconciliation and Equality Centre to continue counseling and giving spiritual hope to LGBTQ people and other minorities in Uganda

In 2013, he celebrated his golden jubilee at Namirembe Cathedral