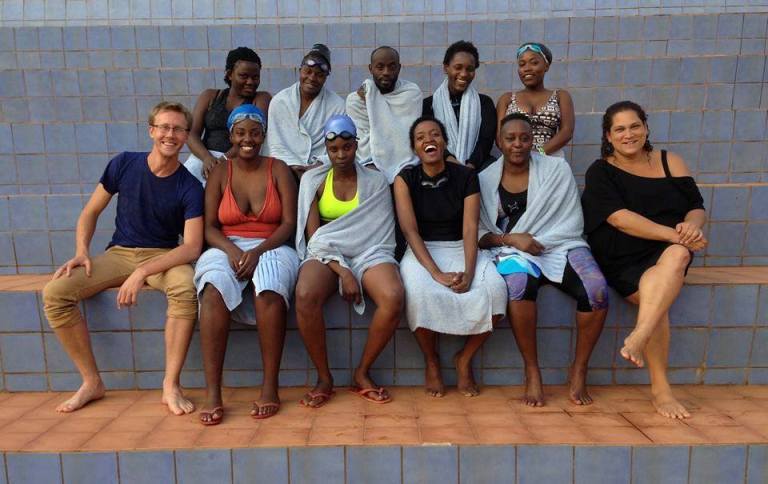 For the last couple of months, team of nine swimmers from the Uganda Lesbian, Gay, Bisexual and Transgender (LGBT) fraternity has been working tirelessly in preparations for the ILGA Aquatic competitions that will take place from 8th to 15th August 2016.

Five of the nine swimmers have been officially selected to represent the Ugandan gender and sexual minority community at this worldwide tournament for Lesbian, Gay, Bisexual, Transgender and Intersex (LGBTI) persons in Edmonton Canada. “This will be a great chance for these talented swimmers who have been facing challenges with the Ugandan mainstream sports fraternity in terms of inclusion,” one of the swimmers remarked.

According to the team, this would not have been possible without the relentless efforts by Nate Freeman an American citizen from the state of Iowa. Nate who is an athlete and a human rights activist while doing his internship with Human Rights Awareness and Promotion Forum (HRAPF), initiated this great move after interactions with sports men and women from the Ugandan LGBTI community whom he says had promising talent.

While Uganda’s participation in the Aquatic competitions was initially a dream, things started looking up after Freeman contacted associates in the US and other parts of the world; he started fundraising to have the five swimmers take part in the prestigious contest and the rest is history.

The team which acquired their visas from the Canadian embassy in Tanzania is now working at to mastering their skills to be able to compete in the games. With his internship over, Freeman is now back home, but left the team in the care of trainer Dolores Martinez from Colorado USA.  Martinez has been living in Uganda since 2010 and has done some credible work with some non-governmental organizations.  She has also been a swimming instructor and coach since 1995.

Kuchu Times last week attended a training session and talked to Martinez who revealed that she was happy to work with such an incredible and fun team and hopes that they will learn a lot from this trip.

“I definitely anticipate a win in some races,; they should also  use this opportunity to network with the different teams at the competition and showcase some of the advocacy work that we have done outside sports to advance human rights for LGBTI persons in Uganda. This will help create more partnerships and networks using the sport,” Diane Bakuraira commonly known as Didi Baks told Kuchu Times

She further narrated that it’s always been difficult for LGBTI persons to be availed platforms to showcase their talents; she used herself as an example where she was on a national swimming team but was denied an opportunity to compete because she was a sexual minority.

“Taking part in the Aquatic competition means a lot to me and it was about time such opportunities were availed to the LGBTI Community because we are very talented,” Didi concluded.

In the past, several groups from the Ugandan LGBTI community have tried to compete in various tournaments organized by the mainstream sports fraternity but  have not been given a fair platform to exhibit their talents hence leading to demoralization.

Many have  been disqualified based on either their gender or sexuality while others have been barred from even registering for such competitions.

“This will be a great chance for these athletes to prove to the world that they have a whole lot to offer,” Coach Martinez remarked.

This year the IGLA Board, in conjunction with Nate Freeman and the Human Rights Awareness and Promotion Forum (HRAPF), is proud to bring 5 LGBT Ugandan swimmers to IGLA 2016 in Edmonton, Canada. The idea is to give the Ugandans an opportunity to interact with other LGBT athletes from around the world and to speak about LGBT issues in their home country. Several of the swimmers are LGBT rights activists. IGLA has pledged $4,000, and Edmonton’s Making Waves Aquatic Club has waived the registration fees and secured housing.

If you are interested in supporting this initiative, please make a tax-deductible contribution to DC Aquatic Club via PayPal (treasurer@swimdcac.org) with the note “IGLA Uganda.” DCAC will send the funds to IGLA which will help defray the costs of airfare and meals.

Please contribute to this worthy cause as we cheer our team on. Kuchu Times wishes the Ugandan swimming Ugandan delegation victory at the World Aquatic Competitions. We are rooting for you comrades!!