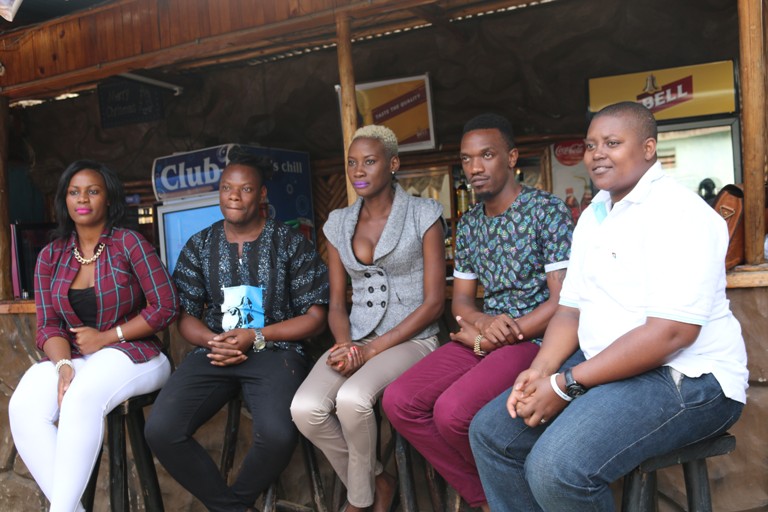 The fifth edition of the Uganda Pride festival is upon us and come 2nd August, the LGBTI community is ready to put all else aside and come out to play, party and stand tall in celebrating who we are. We are expectant, we are excited and most importantly, we are hopeful that the world will soon recognize and respect us.

With just a few days to the long awaited week, we thought what better way to up the hype than let the very people who have organized the festival tell us all they have in store for us. The five person committee was not only excited to share their plans but also sure that this year’s Pride will make a statement for the LGBTI movement in Uganda. In their own word, this year’s Pride is not only about having fun, it is Pride with a purpose and vision.

The committee which comprises of Shawn Mugisha (in charge of security), Brant Luswata (in charge of events), Jean Prossy  (in charge of welfare), Zak Mugisha , (in charge of fundraising  ) and Janet Lisa(in charge of finance) sat down with the Kuchu Times team and shared why it was important for young activists to take over the organization of pride, the details of the upcoming festival as well as why and how the community will receive accountability for all funds received towards this festival.

According to the five, they started organizing and planning Pride a couple of months back and first order of business was community consultations. “We had to first understand what the community wanted out of Pride this year and what they wanted to leave behind. It has been a process well thought out and we are positive, we will deliver to the best of our ability,” Zak said of the organization process.

With the organization done and last minute touches being put in place, the program has now been rolled out; Pride Festival will kick off with a Partner and Sponsors’ gala, which is strictly by invite, on 2nd August. This will be followed by the very first Lesbian and Bisexual night on Wednesday 3rd August, the long awaited Mr and Miss Pride on Thursday 4th August, a community outreach that will see community members cleaning the HIV/AIDS ward in Mulago Hospital on Friday 5th August, the annual Pride parade on 6th August and the closing party to bid farewell to our international guests on Sunday 7th August.

Asked why they have chosen to make the opening gala an invite only event, Zak explains that they thought it very important to have the people that have continuously shown support to the Ugandan LGBTI movement in the same room to first if all show their gratitude and secondly to discuss how best to take the movement to the next level.  He notes that this is not an exclusion policy as all leaders and organization heads have been invited to represent their members as well as their views.

The committee has also switched things up in terms of events. While Pride has previously been using community members to handle events, the committee thought it wise to add a professional touch this year; they have brought event managers on board to handle the events. They say they took this decision basing on the fact that after four years of pride, it was time for the Ugandan movement to move forward and invest in professionalism at every level. Based on this, they vow that the community will not be disappointed with the outcome and service delivery.

They have also made sure that the entertainment is as alluring as the recent of the festival and while they are being secretive about the individuals who will provide these services, they still assure us that they have picked top notch artistes who are not only LGBTI tolerant but also support human rights in different capacities.  They have also involved several LGBTI persons that are in the entertainment business to give them a boost as well as visibility in their own community.

As with most community events, security has been a priority to the organizing committee and they have worked hand in hand with the Police who have assured them of their (police) presence to make sure everyone who attends Pride is safe. The venues of all the events have also agreed to beef up security to eliminate the risk of having a security breech. However Shawn who is coordinating the festival’s security appeals to all attendees to remember the security begins with an individual and calls upon us to make sure we take care of ourselves and avoid compromising situations that could endanger our lives.

With accountability being one of the virtues most yearned for in the community, this year’s committee has assured all and sundry that they will have access to the documents showing the amounts received towards Pride, how and on what it was spent. This is being done for both transparency and trust reasons.

Asked if she thinks they have done the best with the available finances, Lisa explained that the money received and spent was in accordance with budgets that were tendered in to partners and sponsors and the community should therefore be assured that the reports will detail the expenditure during the festival.

With everything already set, it is now up to us to turn up and stand tall as we celebrate our diversity in unity. Like this year’s theme states, ‘Standing Together! Ffena wamu! Sisi Pamoja! Twese Kumwe!’