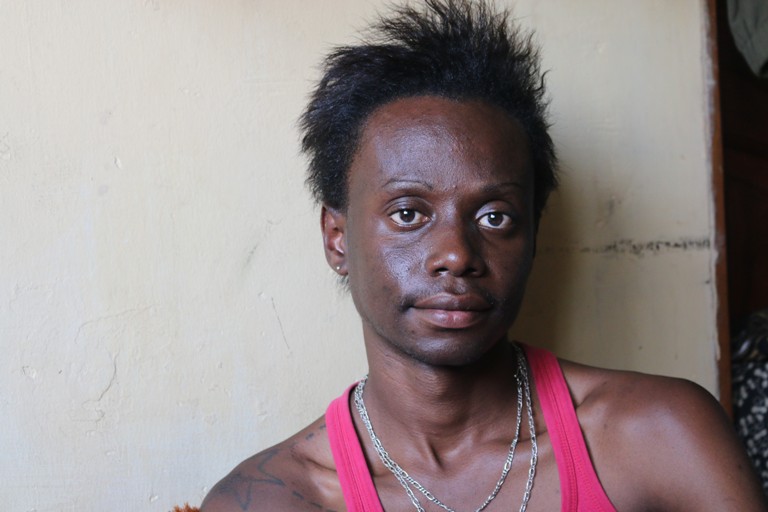 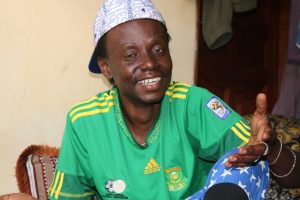 Bizimana Emmy commonly known as Sasha was born on the 1st of January 1990 in the city of Uvira in Sud-Kivu province, north end of Lake Tanganyika in the Democratic Republic of Congo. Sasha is an out transwoman currently living in Uganda as a refugee after fleeing her home country for insecurity reasons based on her sexuality and gender identity concerns.

She hails from a strong Anglican background and has four siblings. As she grew up, most of her family members were uncomfortable with her femininity saying that as a religious family, they would not carry the bundle of having a kuchu child. Despite her family’s coldness, Sasha revealed that one of her sisters was so supportive and encouraged her to be free and embrace who she is.

Sasha was also one of the finalists of Mr and Ms Pride Uganda 2016 and she was among those victims of the Uganda Police assault as they raided the pageant. Kuchu Times visited her place of abode on 3rd September 2016 as she opened up about her life.

While still in Congo, Sasha embarked on a journey to sensitize her community about issues of Lesbian, Gay, Bisexual, Transgender and Intersex (LGBTI) persons as well as sensitizing the general public about HIV/AIDS and other healthy safety campaigns in the Uvira province. To achieve this, she had to undertake a peer education course.

In 2009, Sasha finally got her certificate and began working with an LGBTI organization called Rainbow Mapambazuko as well as Oxfam. She went around the areas on Sud Kivu, Uvira and Bukavu informing LGBTI youth about prevention of HIV/AIDS and how to stay safe from acquiring the deadly virus; she would also distribute IEC materials, condoms and lubricants.

The authorities in Congo warned Sasha claiming the activities she was engaged in were a strategy to promote homosexuality and many times, she was threatened with arrests. In 20014 at the age of 14, Sasha’s cousin reported her to her father that she was trying to have sex with another man; she was immediately summoned for a family meeting where she was questioned about her sexuality.

She was later chased away from home. Having realized that she was going to have to drop out of school, Sasha decided to beg her father for a second chance, if only to remain under his roof and care.

“From today, never call me your father; go out of my house and take your evil ways somewhere else, I don’t give birth to people like you and wherever you go, you should ask God to forgive you,” Sasha recounts her father’s dismissing work

When Sasha was chased away by her father, she took advantage of the insurgence in Congo and crossed over to Burundi. Luckily, George Kanuma (RIP) who is considered a strong influence in the start of the LGBTI movement in Burundi was Sasha’s neighbor. She occasionally went to George; narrating her life’s story and seeking counsel.

It was through George that Sasha gained a new hope and attitude towards life and he introduced her to the underground LGBTI community in Burundi. He also offered to pay her school fees so that she could complete her education. To do this, George suggested that Sasha find someone who could host her (he did not want to be accused of helping a minor).

This is how Sasha ended up with an Auntie whose condition to host her was for her (Sasha) to convert to Islam.

However, the said auntie kept on questioning Sasha’s relationship with her benefactor to a point where she was forced to leave. George Kanuma eventually secured a place for Sasha to live with six other kuchus.

In April 2015, Sasha relocated to Uganda where she currently resides as a refugee.

Being close to the border, Sahhs sometimes sneaked back into Congo where she continued her advoicacy work. One fateful day while conducting her peer education work in Congo (November 2014), she was gang raped by Maimai militia men in an unfinished construction site.

The rapists had always warned Sasha to stop engaging in any activities to do homosexuality in the area and always warned her that one day they would do something to cure her of this evil.  They had been tracking her as she did her peer education work which mostly involved counseling same sex couples and  giving them health consumables. So on this unfortunate day, while coming back from her field work, she was cornered and dragged to an abandoned structure where she was repeatedly raped. After, she was punched countless times on the head leaving her unconscious.

On regaining consciousness, Sasha found herself alone in a strange place in a pool of blood. She tried to run but couldn’t move. She was found by a good Samaritan and plans to get him back to Burundi ensued. The health workers from MSM project in Burundi arrived the following morning to administer Post Exposure Prophylaxis (PEP) to prevent the contraction of the HIV virus. She was then taken to Burundi to undergo an operation to avert the damage that had been inflicted onto his anus by the forceful penetration.

After the operation, Sasha relocated back to Goma in Congo where he stayed with some Kuchu activists. Here the police came and raided their house and arrested Sasha’s friends accusing them of promoting homosexuality in Goma forcing her to flee to Uganda in 2015.

Being in a strange land, Sasha now had a language barrier problem as she is fluent in French and Swahili.

After the pride raid, Sasha was also attacked by neighbors accusing her of being; she has since relocated for safety reasons but is still strong even amidst these hard times. She also says George Kanuma will always be her hero since he mentored into what she is today.  According to Sasha, in the Ugandan LGBTI movement, she has found a new family.

Who is George Kanuma?

George Kanuma was Burundi’s premier and out gay activist. He founded the Association for the Respect of the Rights of Homosexuals (ARDHO), the only LGBT advocacy group in Burundi, and worked to provide resources and support for HIV and AIDS patients. He died on 14th April 2010 of kidney failure at the age of 36. This organization now rebranded into Humure and its objectives are;

Fight all forms of discrimination based upon sexual orientation

Fight AIDS within the LGBTI community.

According to the antigay law signed by Pierre Nkurunziza in 2009, same sex acts are punishable by 2 years in jail or a fine of 100,000 Burundi Franc.