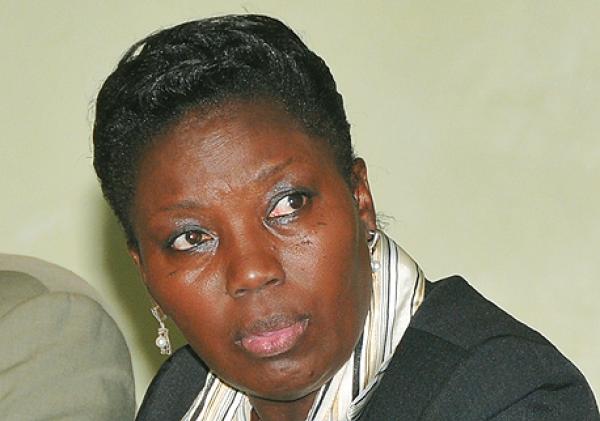 The Speaker of the Ugandan Parliament Hon Rebecca Kadaga early this week called upon the legislators to table a new Anti-Homosexuality Bill. The comments were made during a plenary meeting where the members present were discussing the recent distribution of Bombastic Magazine that saw Parliament receive 80 copies of the annual publication.

"There is no bill on Homosexuality,what we need is a new bill after the court nullified the Anti Homosexuality Act," Kadaga said of the need to create a policy that criminalizes same sex relationships as well as gender liquidity.

It has previously been rumoured that a new bill was being drafted and would soon be tabled before Parliament but with the speakers remarks and persuasion for the bill to be fronted, new fears have arisen as the government will be seeking to prohibit and bring to book anyone who is LGBTI identifying.

Last year while appearing on Capital Radio, Kadaga said, “In 2014, I promised Ugandans that I will give them a Christmas gift by passing the anti-homosexuality bill, which I did. Unfortunately, the bill was annulled by the court after President Yoweri Museveni had assented to it. However, the bill can still be deliberated on in parliament if the movers bring it back to the floor of parliament.” 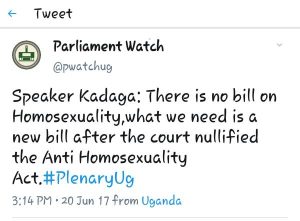 This repetition and deliberate assertion of hatred towards LGBTI persons can nolonger be ignored as it has become clear that one of the things that Hon Kadaga wants embroiled in term as Speaker is criminalisation of homosexuality.

In 2012, Kadaga had a face-off with the Canadian Foreign Affairs Minister John Baird and clearly made it known that under her leadership, the parliament of Uganda would in no way take moves towards decriminalizing homosexuality.

It should be remembered that the Parliament of Uganda passed the Anti Homosexuality Bill in December 2013 and signed into law in February 2014. However, it was annulled by the High Court in August 2014 and ever since, Parliament has been threatening to introduce another bill to label homosexuality an offense.