Brave activists from Ghana, under the organisation LGBT+ RIGHTS GHANA, at the end of last month commissioned a community space and officially opened their doors to the LGBT community in the West African nation. The event also doubled as a fundraiser as the organization embarks on a journey to further champion the rights and freedoms of all LGBTIQA persons in Ghana.

However, this well-meaning and celebration- worthy event has now turned into a subject of contention and rage as homophobes in the country are calling for the closure of the newly opened space. In a press statement to counter the false accusations being peddled, LGBT+ RIGHTS GHANA clarified that the Australian High Commissioner was merely an attendee at the event and did not fund the official opening of their community hub.

They further call for calm amongst the community and stand firm in pursuit of justice for all gender and sexual minorities in Ghana.

The European Union, through their Twitter account @EuropeInGhana also re-affirmed their commitment to equality, tolerance and respect for all and their support got support for the promotion of LGBTIQ rights.

At the fore front of this homophobia peddling is anti-gay crusader Moses Foh-Amoaning who has called for the organization heads’ arrest.

““The presidency, the ministry of foreign Affairs and the IGP [Inspector General of Police] have every right to investigate that office to close it down immediately and arrest and prosecute those people involved in it,” Foh-Amoaning said.

Below is the press statement as shared by LGBT+ RIGHTS GHANA 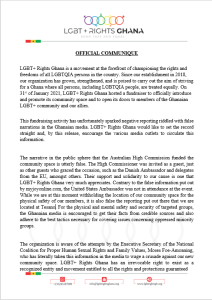 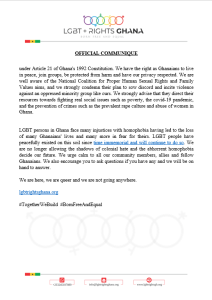