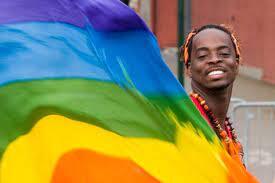 In celebration of their first ever Pride event, LGBTIQ people in Malawi took to the streets on 29th June 2021 carrying rainbow flags and placards in a demonstration. Many of them covered their faces with masks, not only to protect themselves from COVID-19 but also to hide their faces as the country criminalizes same sex relations making LGBTIQ people targets of violence by homophobic Malawians.

“People are not safe here, they are targeted for violence all the time, so I don’t blame them if they cover their up their faces.” Eric Sambisa, director of Nyasa Rainbow Alliance, Pride organizers.

He added that, “We are pushing for recognition by the government, legalization of same-sex marriage and equal access to health care.”

The marching parade delivered a petition to Malawi’s government urging the cancellation of an online survey on Malawians’ views on same sex relations. Malawi held out the survey as a reason for delaying the government’s response to pressure from the international community to better protect sexual minorities.

George Kachimanga the program manager at Nyasa Rainbow Alliance said, “We want the government of Malawi to review the laws on homosexuality which is currently punishable by a 14 year maximum sentence, the absence of legal reform subjects LGBTI people to human rights violations, discrimination, stigma and unequal access to health care.”

Nyasa Rainbow Alliance is appealing to the Malawi Law Society as well as the country’s parliament and human rights commission to support them in their quest for change.