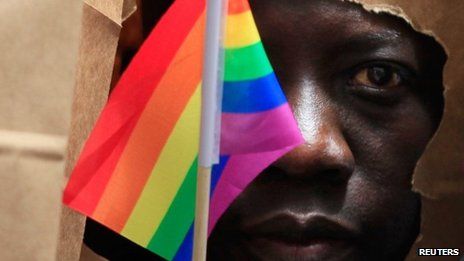 On the 13th of February 2015 a movie based on a true story about an outed LGBTI person in Kampala was premiered registering a good attendance. Members from the Ugandan lgbti community and the allies graced the occasion. Based on a true story, Vida a gay man and an employee of one of the leading advertising firms in the city faces one of the hardest moments of his lifetime when his name and photo appear in a newspaper tabloid among other gays and lesbians with the paper calling for hanging these lgbti people.  His boss on reading the newspaper he immediately drafts a job termination letter thus  chasing him away from his form,  going home he starts receiving calls from unidentified telephone numbers yet these are detectives who lure him into a trap and lead him to a detention center, tortured to reveal the whereabouts of his colleagues and disclose how they carry out their recruitment and promotion of the homosexuality vice in the country,  all this is in vain and he is later set free thus  Vida starts moving from place to place for safety and its where he finally meets the end of he  is killed by a mob hit with bricks and heavy stones till he died, the movie is based on a true story and Vida’s body was later discovered by police in a trench in Nabingo.

Later after the movie launch the team that worked on the movie was introduced thus receiving a strong applause from the audience. One f the directors explained why they came up with this idea and to follow up the untold story of Vida’s death, he said that Vida was killed by the mob in the disguise by the mob that he was a thief but in reality they killed him because his face had appeared in the list of outed homosexuals in one of the tabloids saying such like him needed to be killed to send a message out there that homosexuality was a curse in the African culture.

Many viewers in the audience felt touched a lot since this same experience has happened to them in their daily life as a Ugandan lgbti thus sending out a strong message to the media houses to stop outing lgbti people since it has led to many members of the community being attacked by the mob, evictions by their landlords, families disowning some members, job terminations, expulsions from school, loss of friends.

Mob justice has always happened in Uganda on the disguise of thieving, I personally was not aware of this scenario but it’s really a touching and sad story, this was so educative.- Kasha an International Award winning  leading LGBTI activist said when called to comment about the movie.