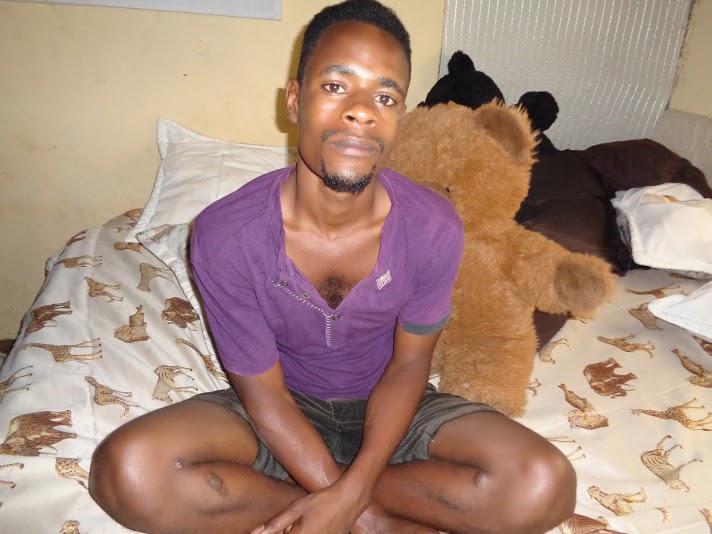 My name is Kwesigabo Simon a total orphan. Am 23 years old born in Masaka district in central Uganda and am a gay man. On the 11th of September 2012, me and my boyfriend were in our rental room having sex when one of the next door neighbors heard our screams. He had always suspected me and my boyfriend being gay. On hearing the screams, he immediately rushed to Kalisizo police station and on the way there he went telling neighbours in the village that he heard us having sex. He then came with all villagers and police right to our door and they knocked. We didn’t open it which forced the police to kick it inside. Police found us all naked and threw all of us out of the house thus handcuffing us. Immediately the mob started beating us with stones and sticks with nails saying that we were curses and needed to be killed. Later on, the police took us through the whole village naked, we were being dragged on the road thus stones pierced our bodies which caused severe bleeding and excruciating pain. No first aid was given to us and the police threw us in the cells. They told inmates that we were gay so they better stand warned because we may sodomize them at night, this angered the inmates who started beating us until sleep took them over. I thank God that I didn’t die because the pain was too much. At one point amidst the heavy beatings by these inmates we pretended to be dead and my friend asked them if they wished they could kill us to get away from this much pain. At 10 AM the next day, we were taken to a nearby health centre by some police officers since we were in a critical condition. When we reached the clinic the doctor who came to work on us was my former boyfriend who felt pity for me.

Police didn’t bother guarding us in the hospital because they knew we were half dead. At 12 AM when the doctor was leaving work he told me and my boyfriend that he was not going to lock the back door and if any of us has the strength to run, we could escape and get away. He gave us pain killers to use on our way. We ran away and when we reached a place where no one knew us we separated. I ran to Mbarara for safety where I started serving as a potter on various sites under construction to earn something for survival. I couldn’t go home because me and my brothers no longer face each other because of my sexuality. After seven months as I was walking in Mbarara town one person who was among the mob that tortured us in masaka shouted at me saying “you gay you are still alive?” I thought you were dead”. I then left Mbarara the next morning and fled to Kampala city where I reside now. When I reached Kampala I was referred to a good Samaritan on Salaama road who housed me for sometimes as I walked all around the city looking for something to do, I didn’t know many kuchus in Kampala but I knew one community leader called Apollo who has been there for me in hard times. I managed to get a job as a waiter in a restaurant around by a certain friend of mine in Masaka, where I served for 6 months and through this my feeding problems were solved and the little I earned I would help me raise a little rent money so that me and my host could share costs. One morning, one of the restaurants food suppliers didn’t show up so the owner brought in another person who noticed me at first glance, so he told my boss how he witnessed me and my boyfriend being beaten by a mob in Masaka in 2012 for being gay, I denied the allegations made and I told him that he had me mistaken for someone else, he told my boss that he had proof that I must be having scars so my boss and other work mates forced me to take my shirt off and voilà there they were. This led to my immediate termination.

Because I was no longer contributing anything to the rent my host told me to look for alternative accommodation. One Sunday night at Ram bar, I narrated my story to a friend who was touched and even thought he has no steady income and lives in a Kampala slum, he is my current host.

Due to my current, situation I have resorted to doing sex work sometimes for survival which is a very hard life to live since there are many challenges involved, some men use you and don’t pay, sometimes you don’t know what the client is planning against you. Am currently living an awkward lifestyle, having very unhealthy meals (which also are very hard to come by) and with a major problem of scars which itch me night and day.

Its because of all this that i request for support from friends and well wishers, because i need to do surgery. I am glad that finally I have got a platform to share my story with the rest of the world.