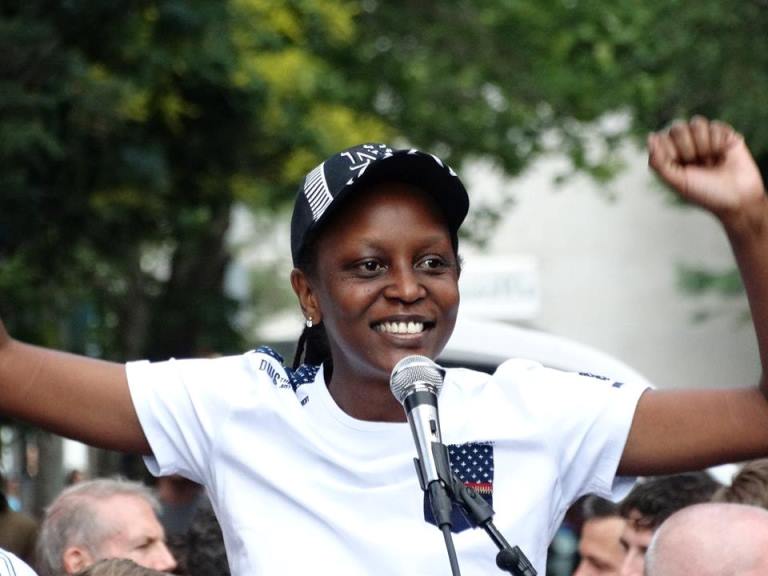 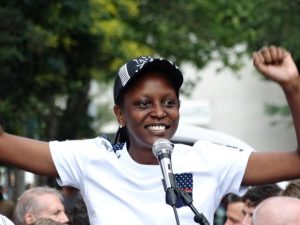 Kasha Jacqueline Nabagesera has celebrated many milestones in her journey as an LGBTI rights activist and last month saw her make another landmark in her career. The 35 year old human rights defender made history as the first African to lead the celebrated New York Pride march as Grand Marshal.

Together with renown English actors Sir Derek Jacobi (most remembered for his role in the blockbuster Gladiator), X-Men’s Sir Ian Mckellen and artist J Christopher Neal, Kasha led millions of people as they walked along Fifth Avenue in New York to celebrate diversity and equality.

This year’s Pride themed ‘Complete the Dream’ was geared towards the Marshals demonstrating advocacy on drastically different stages, but all with the same goal in mind. In March Director David Studinski‘s own words, “No matter where they work their words, they give voice to the ongoing narrative of our civil rights battle. Pride is a global movement, and these individuals remind us that even with great progress made, much remains before we complete the dream.”

As always, Kasha who has spent her adult life advocating for the rights of LGBTI persons used the opportunity to talk about the issues affecting sexual minorities in Africa. She also lobbied for the forthcoming Uganda Pride and collected several goodies that are to be used in the week-long event scheduled for early August.

The NYC Pride was attended by several significant figures like celebrated singer Ariane Grande and newly transitioned Caityln Jenner, who made a surprise appearance to show her support for the rights of sexual minorities.

Kasha Jacqueline is a familiar face and name in Uganda’s mainstream media especially the tabloids; but the norm is for her image to be plastered on news that is derogatory. Her face has been plastered on the front page of newspapers and on several occasions, accused of recruiting people into homosexuality with no evidence to support such ridiculous and defamatory claims.

However, time and again, she has been honored for dedicating her life to a struggle many would rather stay away from with very few media houses reporting on such positivity. When her name was listed on Harvard’s Hall of Fame, Uganda’s media paid the big news no attention and those that did attracted the normal bashing that has now become synonymous to her name.

Take her being Grand Marshal for instance, not a single local media house reported on the event save for a few citizen journalists who reported about it on their social media pages but still managed to have negative insinuations therein.

Nonetheless, Kuchu Times, a platform Kasha founded and has over eight hundred thousand hits in a period of just seven months celebrates her, for her dedication and sacrifice does not deserve to go unnoticed and unappreciated. Together with the LGBTI community in Uganda, we congratulate Kasha, a resilient leader on this achievement and thank her for putting the movement before herself.

Founded Freedom and Roam Uganda (FARUG), the first LBT organization in Uganda  in 2003

Voted Most Inspiring Queer Woman by Velvet Magazine in 2010

Listed among the 50 most inspiring feminist women in Africa (2010)

Received the Martin Ennals Award for Human Rights Defenders in 2011

Awarded the Sean McBride Award from Amnesty International Dublin in 2013

Received the International Activist of the Year Award for the GALAS (Gay and Lesbian Awards, organised by the National Lesbian and Gay Federation of Ireland in 2013

Awarded the Nuremberg International Human Rights Award 2013 among many others.