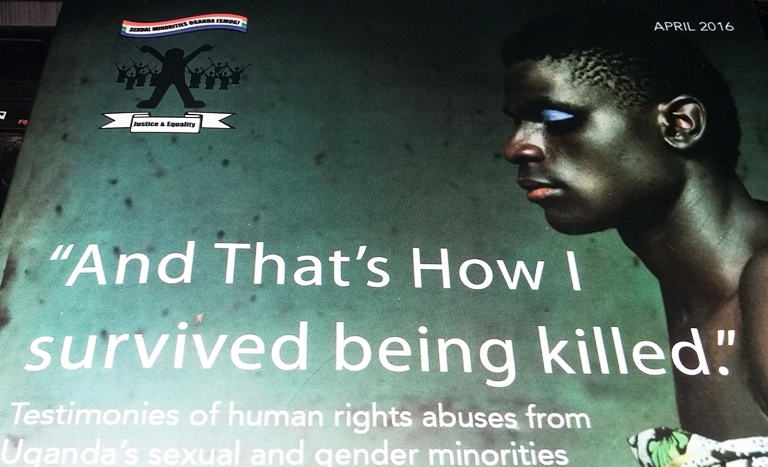 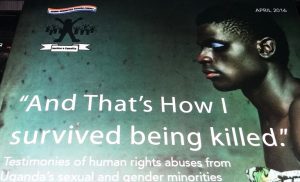 Sexual Minorities Uganda (SMUG) last week launched their latest publication titled ‘And That’s how I survived being Killed’ a booklet put together with the help of their partners ICE Breakers Uganda, Spectrum Uganda and Rainbow Health Foundation Mbarara.

The 50 page booklet is a compilation of first hand testimonies of several gender and sexual minorities  and documents the physical threats, violent attacks, torture, blackmail, press intrusion and harassment they have endured over the years.

According to SMUG’s Research and Documentation Officer Richard Lusimbo, the report saw over 150 persons interviewed and 264 cases of LGBTI persecutions divulged. Amongst these, 35 were physical attacks, 13 were instances of torture, 73 involved loss of property and 59 were social excision based.

“The entire town now calls us homosexuals. We were chased out of the house we were staying in and even where we were working, we were chased.  Whenever I try to go back, they shout and insult me so I  decided to stay with my friend because it is safe and police has not followed up with me,” Daniel a Ntungamo based youth shared his dilemma in ‘And That’s How I survived Being Killed.”

Daniel’s is one of the many stories that leave you grief stricken and shocked at the level of homophobia and ignorance in Uganda, factors that Lusimbo says the publication is aimed at bringing to the forefront.

He also revealed that SMUG felt the need to document the rampant cases of persecutions which were a common occurrence within the community but were unfortunately not widely documented, reported or even publicized in comparison to other crimes.

Frank Mugisha, the Executive Director of SMUG, in his remarks called upon the government to decriminalise homosexuality and also use the available research on gender and sexual minorities to make better informed decisions on the subject. He also encouraged partners to use the report as evidence while advocating for human rights.

Also launched on the same day was the handbook, ‘Know Your Rights’. The SMUG Safety and Protection Officer, Douglas Mawadri, while introducing this great work said they had put together an abridged version of the Ugandan constitution to help LGBTI persons better understand their rights. SMUG came up with the idea for ‘Know Your Rights’ after realizing hey realized there was need to educate community members on how to handle themselves when arrested or if caught in a legal situation.

In his closing statement, Chief Guest Hassan Shire expressed his gratitude towards SMUG and Uganda’s LGBTI community in general for their resilience to the cause of defending human rights.  He also encouraged community organizations to embrace documentation of their works as this will provide evidence that is so often required by stakeholders and policy makers who argue that LGBTI persecutions are a made up theory.

The launch was attended by over 50 people from various community organizations, partners, and media.

Sexual Minorities Uganda (SMUG) is an umbrella non-governmental organization based in Kampala, Uganda. SMUG advocates for the protection and promotion of human rights of lesbian, gay, bisexual and transgender Ugandans.

SMUG was formed in March 2004 as a Lesbian, Gay, Bisexual, Transgender, Intersex (LGBTI) non-government network to address Human Rights emerging issues based on sexual orientation and gender identity or expression. Today the network comprises 18 LGBTI organizations all working to advocate for rights of LGBTI. The umbrella entity SMUG is entrusted the responsibility of advocacy for policy reforms as Member Organizations offer services on economic empowerment, health, counseling and guidance and other services to the LGBT community.