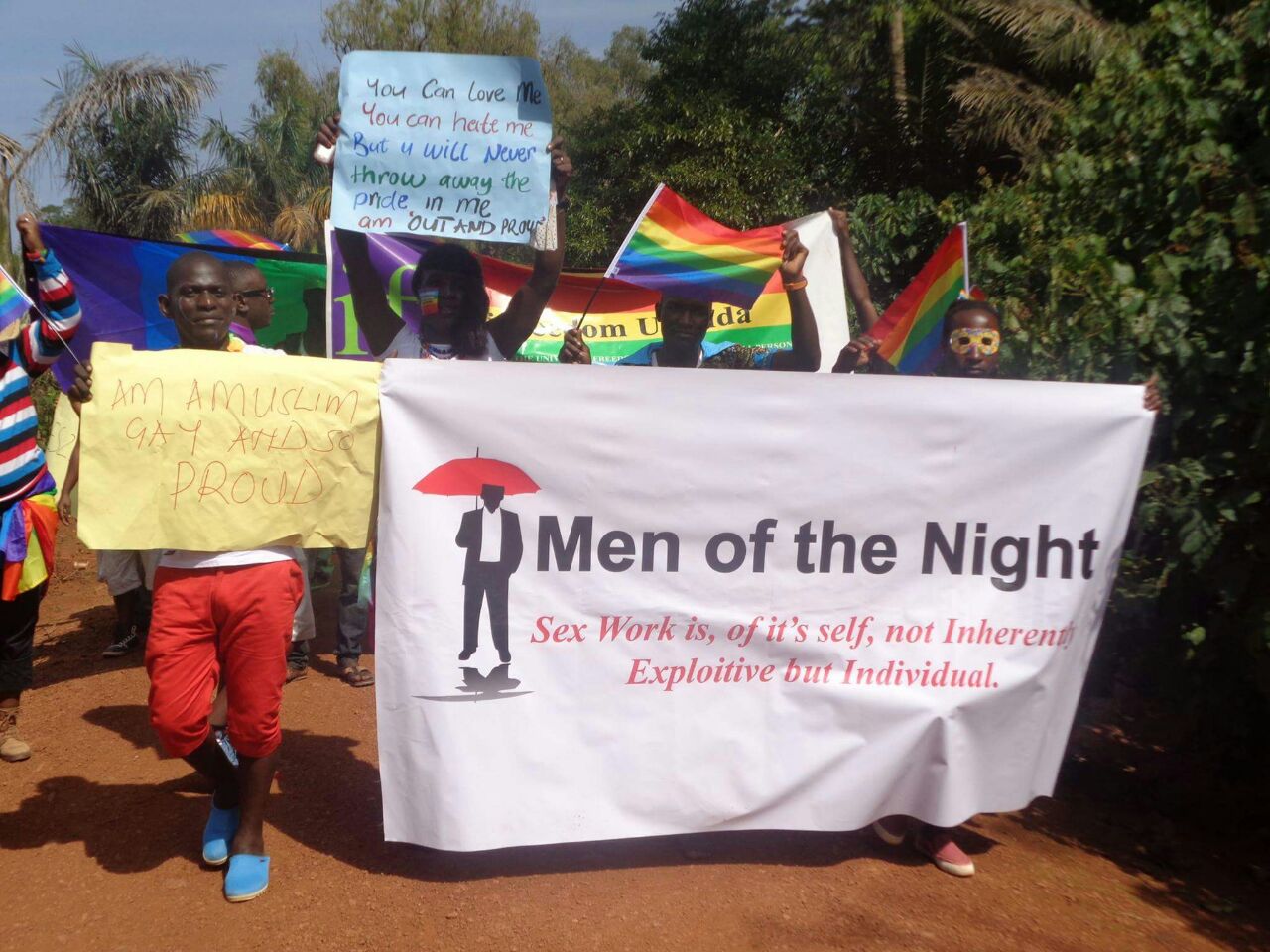 Kakande Cameron, 25 is a male sex work activist and the Director of Men of the Night. Because he loved to live a rather elaborate lifestyle to match the high standards of other students at the university, he joined sex work at the age of 20.

Unmindful of the dangers associated with having multiple sexual partners, he quickly learnt that sex work had its risks. Cameron’s clients are both foreign and local and he charges different rates based on one’s financial status.

Cameron was brave enough to come out and bring to light such a controversial issue that may Ugandans would not even dare talk about in the past. Together with three other sex workers, they saw the need to open up and share with the rest of the world the challenges that male sex workers go through in Uganda, resulting into the formation of Men of the Night.

Men of the Night is a male sex workers’ organization that offers health services to men who sell sex to both men and women.  The founder members chose this name because they are male sex workers who operate during the night because the clientele is usually high during at that time.

To bridge this missing gap, a group of determined and enthusiastic male sex workers decided to come together and pave way for an enabling environment that would enable them create a platform where they can express their urgent needs such that different responsible stake holders can involve these suggestions in different strategic plans.

In Uganda and many other African countries, sex work is highly condemned by different cultures as well as the governing laws and in fact criminalise this trade.  Reciprocally, most religious sects in Uganda highly consider sex work immoral and ungodly, with most sermons preached in different houses of worship highly denouncing this kind of work as an evil practice.

The law enforcement officers especially the police usually conduct abrupt raids on different brothels where sex workers meet their clients, arresting many. Such acts become more brutal if a man stands out and confesses to be a sex worker.  Men of the Night therefore felt that there was a missing avenue where they could come up and fight for their rights as enshrined in the constitution of Uganda with the state tasked to protect all its citizens and their property irrespective of their differences in beliefs, culture, religion or different values.

At the start of 2015, Men of the Night held a dialogue with some of the community health service providers and through this, an approximate of 30 male sex workers registered bringing the total number of members to 70.

This number includes those members who are bold enough to come out and claim their space as sex workers as well as those who would rather remain anonymous for the sake of their families and friends.

Men of the Night does not provide direct health services to its members but refers them to some of the already engaged  health referral centres that provide free and friendly services to the Ugandan LGBTI and sex work communities.

MON also refers its members to friendly legal service providers such as Human Rights Awareness and Promotion Forum-HRAPF in cases where their members are faced with any legal challenges. They also conduct dialogue with different stake holders to discuss the daily living conditions of male sex workers in Uganda.

While dealing with their members, sex education and safer sex practices are always considered a great step towards curbing the spread of HIV/AIDS and other STDs. MON usually conducts such sessions to equip their members with more knowledge about safe sex and how to encourage their clients to use condoms. This is accompanied with providing them with health consumables such as lubricants and condoms to reduce the health related risks of unprotected sex.

Some of the clients have a bad reputation of desisting from paying for sex work services and some end up hurting and raping their clients. However in such cases, most members do not open up to the authorities since the fear of  being apprehended is high.

Speaking to Kuchu Times, Kakande revealed that their business is very lucrative given that many people engage in sex work indirectly. While commenting about the spaces where they find their clients, both male and female, he said they sometimes find them in social places such as recreational centers, hotels, gyms as well as the internet.

Stigma is one of the highest challenges faced by male sex workers since the majority of Ugandans consider sex work a taboo. With this background, the men that engage in this trade need immense psychosocial support such as counseling, something that prompted MON to introduce monthly dialogue sessions where members have heart to heart talks and try to find solutions for one another’s problems. This is done by the help of a counselor who helps these frustrated men to regain their emotional soundness.

Men of the Night in addition has empowered its members with skills in income generating activities and through this, some of  the members have used their income to initiate small scale projects such as poultry, baking, saloon  and other income generating

Kuchu Times talked to Felix, one of the long time members of Men of the Night, and he revealed that his clientele is both women and men. He narrated that he was introduced into this business by his close friend, who was living a good life.

When asked about the different channels though which  male sex workers in Uganda like him get clients or connect with their clients, he said that some hide in dark corners on Kampala streets and social media platforms Felix hopes to leave the risky business soon to focus on his work outside of the sex work trade.