Bad Black is an out transgender woman and sex worker who has chosen to use social media, especially face book,  to sensitize Ugandan masses that lives of both transgender people and sex workers matter. According to Black, life for transgender women in a country like Uganda is tough since majority of the population considers them as the face of homosexuality.

This has led to a number of transpeople being attacked, some evicted from their homes and fired from their jobs, discrimination at different health facilities and others rejected by their families.

It is therefore upon this background that some brave and bold transgender identifying individuals like Bad Black have come out openly to fight for their rights. Kuchu Times had a moment the bold and outspoken diva as she narrated why she has recently resorted to use of social media to express her reality of being a transgender woman and sex worker inUganda.

Black who recently formed an organization, Transgender Women Living with HIV/AIDS in Uganda begun her advocacy career with Youth On Rock Foundation in 2010 and later joined other transgender women to form Come Out Post Test Club (COPTEC) in 2013. 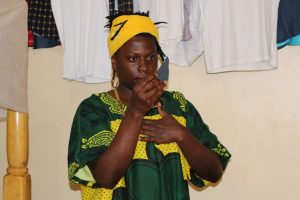 Bad Black has tested the wrath of some of her angry social media followers who have lashed at her Facebook posts but says that some of those are simply inquisitive to learn what being transgender means.  She says such have gone on to contact her privately and she relishes in helping them comprehend the meaning of transgender persons as well as demystify all the stories surrounding sexual and gender minorities.

“I have told most of these that though I was biologically born male, all my life, I have felt l more of a woman,” Black told Kuchu Times.

Bad Black also says that many young people have approached her for guidance on what it means to be a transgender and many have come out to her. She explains that she has tried to be of comfort to such confused youth because she vividly remembers a time when she was just as confused and lost.

Black further told Kuchu Times that her major reason for adopting this kind of advocacy strategy is to make it clear before the masses that if they have any person in their homes who is different (identifies as transgender), they need not to reject or mistreat them but rather embrace and avail them with all the support they need.

In reference to some of our published stories, it has been discovered that most trans people have been ostracized by parents and guardians because these people have not taken the onus to understand what they (transpeople) go through. Many have ended up losing chances of attaining higher levels of education, some have resorted to sex work as means of survival  thus exposing them to the risk of acquiring HIV/AIDS and other related STDs, others have also resorted to drug and substance abuse because of stigma and discrimination and many other torments.

“I know the work I’m doing is very risky but I won’t give up until I see a just and free society, I am not doing this for myself but rather for the young people who face day to day discrimination because of who they are,” Black said of her zeal to continue her advocacy.

Black says that ever since she joined the Uganda Lesbian, Gay, Bisexual, Transgender and Intersex (LGBTI) movement in 2010, a lot has changed in this struggle. She recognizes that the intensive advocacy has yielded some good fruits since they have managed to get many health service providers on board.

She also pointed out that many young people who have joined this LGBTI fraternity have come with great and unique ideas which have helped to strengthen the movement at large. Black attributes the rising number of HIV/AIDS cases among the transgender women community in Uganda to many having to resort to sex work for survival and yet they have little knowledge about HIV.

Black who has lost employment chances, most notably to work as a presenter at one of the leading TV stations in Kampala, because of her gender identity says that the environment is not always friendly for her and her colleagues since the media outings have to a great extent contributed to stigma and discrimination..

Bad Black who started doing sex work in 2009 reveals that she no longer engages in this profession full time because she has mobilized other transwomen to form a savings group in Kawempe division. She also advises other transgender women to adapt good saving habits because the future is uncertain. Black told Kuchu Times that through her minimal savings, she has been able to enroll for an online course in university in the US where she is majoring in Information Technology.