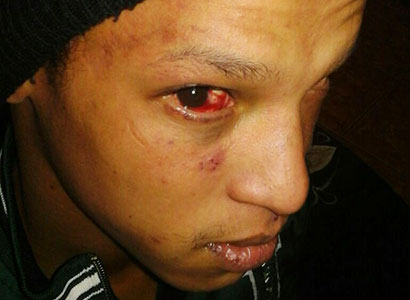 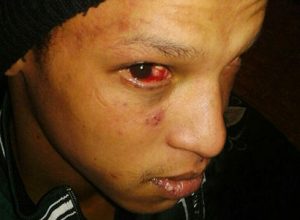 A young Western Cape man is still grappling in pain after being brutally targeted by two youths because of his sexuality.

Geno Jonkers, a beauty spa consultant from Crawford, said he fears for his life after being attacked last month at his uncle’s home in Cape Town’s Eerste River. The 20-year-old was visiting his family when he heard voices calling him outside. He walked out the house to the gate when he was grabbed from behind.

“He was choking me. I couldn’t breath or call out for help. Then another one came around the corner and they dragged me across the road, behind a house, and they beat me there,” he said.

Jonkers believed that he was going to die: “My only thought while they were beating me was, ‘What about my family?’ I was worried about my mom.”

He was eventually able to escape from the attackers and ran back inside his uncle’s house. “They must have gotten tired of beating me and I just ran.”The assailants continued to threaten their victim from outside the home for some time before they finally left.

Jonkers said he knew his attackers, who are believed to be in their teens. Earlier in the day he had interacted with them at a shop when they asked him for money.

Police spokesman Captain FC van Wyk told the Daily Voice that a 15-year-old was arrested and appeared in the Blue Downs Magistrates’ Court on a charge of assault on June 24, but Jonkers claims that he was never informed and that the attacker is back home.

“I’m worried they will come after me again because the police haven’t done anything about it. And today it is three weeks after the incident happened and the police still hasn’t gotten back to me since I reported the case.”

Jonkers explained that this was the first time he had been the victim of overt homophobia and that the experience has scarred him.

“I’m more scared because I don’t know what will happen. It has changed me emotionally because I’m not the person I used to be. I used to be an outgoing person but I don’t go out any longer. I’m just in the house.”

When asked if he regrets reporting the case to the police, Jonkers responded: “A month ago one of my friends was murdered and justice hasn’t been served in his case. At first I didn’t want to report to the police but I thought to myself, ‘It could happen to someone else tomorrow, so I have to take a stand’.”

He added: “Something has to be done about it.”

Triangle Project’s Matthew Clayton said the organisation, which is one of the Love Not Hate campaign partners, has provided counselling to Jonkers.

Triangle has also forwarded details of the case to the Department of Justice’s hate crime Rapid Response Unit and is waiting for a reply.