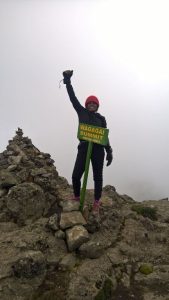 Sanyu Hajarah Batte, an out bisexual woman, feminist, sex worker and sex work/ human rights activist recently took to fulfilling one of the items on her bucket list-climbing Mount Elgon and upon her return, shared her experience with Kuchu Times.

Hajarah grew up in a religious Islamic family that also believed in observing the cultural norms. believing For example, she recalls being told that are generally not supposed to climb – often she watched as her brothers and cousins (the boys) had all the fun as they climbed one tree after another and all she could do was stand by and silently admire them. She admits that from such situations that so often people consider minor, she quickly came to the conclusion that religion and culture marginalize women a lot.

As she grew and turned into a feminist, Hajarah says she had many dreams; along the way, she pushed herself to do things that would normally be considered extraordinary for a woman. “Why do men do things that we women cannot do?” Hajarah found herself musing on many occasions.

If I do things that men do, will it make me a man or less of a woman? Those were the kind of questions that flooded her mind. Hajarah has always had a special love for mountains. “I had that dream for many years that if all goes well, one day, I will actually climb a mountain and I will reach the peak because many people think women cannot do such things,” Hajarah said of how she perceived the idea to go mountain climbing. 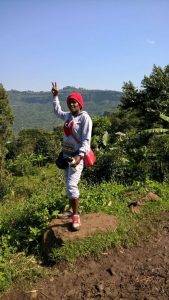 Being a feminist and human rights defender, I say there are many things we can do, more so the marginalized community (LGBTI). We face many challenges and obstacles in our work, from the communities we come, the laws and policies as well as the stigma and discrimination. I therefore resolved to climb Mount Elgon; it is a way of reminding myself that I will conquer despite the challenges and obstacles I will meet on my way.

My dream was to reach the highest peak of Mount Elgon called Wagagai; I woke up one morning, prepared and consulted about the essentials for my trip and off I went.

After the police raid on Pride, I really felt so bad, I was angry and depressed and felt like we were trapped in a hopeless situation. I didn’t expect all the brutality exhibited by the police expect and it was disheartening to realize that despite the work we have done sensitizing the police, creating awareness for the rights of the LGBTI persons and sex workers, we could still be subjected to such violence.

I was determined to proudly go for the Pride parade; in fact the following day I joined the group that handed over equipment to one of the health facilities within town and also distributed condoms and lubricants on the streets of Kampala- this was also to promote the culture of safe sex.

With the cancellation of the Parade, I quickly made up my mind to finally pursue my dream and get mountain climbing off my bucket list. I realize that people assume that LGBTI persons cannot harbor big dreams and actually go after them; in their ignorant minds, we are psychologically and mentally disturbed.

When you are climbing a mountain, you are on a life or death mission you because you find challenges along this journey and I wanted to show the world that despite the Police hijacking our pride activities, we can still do many other things because we too are human beings and we can conquer. I was sending them a message that if a woman can climb the mountain to the highest peak in three and a half days, then the struggle must continue. 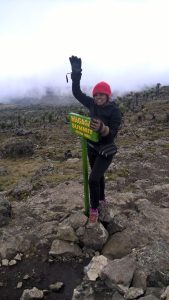 Climbing a mountain is therapy, I know many of my colleagues have different dreams and are from different backgrounds despite the fact that we do the same kind of work. My message to them is to a

Always keep focused on their dreams inspite of the obstacles.