Ugandan Members of Parliament, in a move to re-introduce the Anti Homosexuality Bill to the floor of Parliament, yesterday commended the Speaker Hon Rebecca Kadaga for what they call ‘upholding and protecting Uganda’s cultural values against same sex marriage at the Inter Parliamentary Union assembly in Geneva Switzerland late last month’.

Hon Cecilia Ogwal in defense of the motion asserted that unless Uganda enacts a strong law which will stop everyone from practicing homosexuality, it will spread like a wild fire. “WE must preserve our values. Let us not just talk; let us bring this law and pass it,” she said.  Also in support of this archaic motion the Member of Parliament for Soroti Municipality Hon. Herbert Ariko said that a law should not only be proper but must take into consideration the moral fibre of the nation, the act or bill which was nullified by court must become one of the urgent business of this House.

The motion resulted into many more members putting their assertions forward making it clear that the new bill is to be put on the priority list for Uganda’s Parliamentary discussions; this is nolonger speculation- the Parliament of Uganda has declared an urgent need for the House to retable the AHB and give grave punishments to people in same sex relationships. 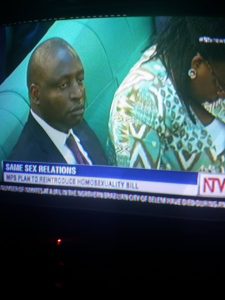 It should be remembered that this bill was first tabled in 2009, passed in December 2013 and signed into law in February 2014. It was however annulled in August 2014 with court ruling it invalid on procedural grounds.

This is not the first time since 2014 that the Ugandan Parliament has attempted to retable the bill. In fact, one of the LGBT community leaders noted that this has become a trend for Parliament to bring up the topic of homosexuality every time they need to redeem themselves or are caught in unpleasant situations. “LGBTI Ugandans have become a currency that Parliament uses to derail the nation from government’s shortcomings. Every time they are caught in a scandal, they bring up the AHB to divert attention from their rotten governance. This is however not to say that we should not continue to put strategies in place to counter these barbaric laws; if anything, we must make sure we are prepared to take them head on.” she observed.

Kasha Jacqueline Nabagesera, a celebrated human rights activist echoed the same sentiments, “I am not very surprised about this move by our Parliamentarians. My community has turned into a scapegoat for the Ugandan Parliament and this is very heartbreaking. They are now caught in the social media tax saga, the URA-Bank details issues, the age limit court case and the endless corruption cases and who else do they bring up to distract the people of Uganda- the LGBTI community of course. Personally, I am not worried because we are even better prepared than we were in 2009;let them bring it on, we are ready for them,” Kasha asserted with confidence.

Speaking to Clare Byarugaba from Chapter Four about this development, she said, “As the Ugandan LGBT community, we survived the terrible consequences of the first anti homosexuality law. I would like to think that parliament has learned her lessons on why it’s a terrible idea to single us out as a community to attempt to violate our rights as Ugandan citizens. It’s also possible that these MPs’ desire for cheap popularity will outweigh their humanity which at its core means that their duty is to make laws that protect rather than prosecute individuals. Whatever the case, as an activist I have been ready since 2014- if they do introduce another bill- they will find me resilient, unapologetic and fiercely defensive of the rights of LGBT individuals.”

As anticipated the Ugandan LGBTI community is now on tenterhooks wondering if the scenarios that unfolded in 2009-2014 are about to reoccur; memories of people being fired, lynched, disowned by families are still fresh in the minds of many and this brings a few questions to mind.

Like Clare, did we as a community learn from the past and how are we using these lessons to face this new attempt to witch hunt us? How prepared are we to counter the new AHB, both as a community and as individuals?